In the first quarter of each year, SaaS Capital conducts a survey of B2B SaaS company metrics. This year’s study marked our 9th annual survey, with over 1,400 private B2B SaaS companies responding. Below is a summary of our findings on private SaaS company growth rates* which were published earlier this month. (You can join the SaaS Capital community here and receive new research as soon as it is published.)

The most important metric we track is revenue growth.  As explained in our framework for valuing SaaS companies, growth rate is the single most significant determinant of your company’s valuation multiple.

And while it’s not difficult to benchmark your SaaS company’s performance against that of public SaaS companies, it’s also only slightly useful. The sheer scale of public companies makes for an apples-to-oranges comparison to smaller, private companies. 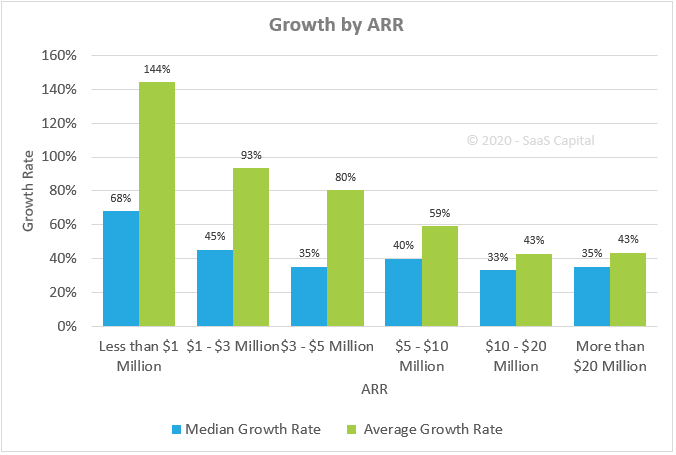 Overall, growth in the SaaS industry in 2019 was pervasive. Only 2% of the companies in the survey reported shrinking revenue year-over-year, and 87% reported annual revenue growth of greater than 10%. The most obvious takeaway is that growth rates decline as revenue levels increase. This is simply due to math: as the denominator increases, it becomes increasingly hard to maintain the same percentage change.

It is not enough for new bookings to remain constant; new bookings must grow year-over-year to maintain the same growth rate. This phenomenon is most pronounced in the difference between the average and median values of smaller companies.

Boards and management teams need to use the data above to set informed growth plans and not simply base assumptions on prior-year performance.

Here we get a better understanding of the range that exists at each revenue stage:

The full Research Brief offers additional commentary on the data above as well as breakdowns on growth rate by funding type, growth rate and retention, and growth rate by company age. Key takeaways include:

*It needs to be explicitly stated that this data was collected in early 2020 and is based on 2019 performance metrics, before the impact of the COVID-19 pandemic. Additional commentary and anecdotal data gathered since the pandemic began can be found in 2020 Private SaaS Company Growth Rate Benchmarks.

Public SaaS company data is the best starting point when valuing a private SaaS business so we created the SaaS Capital Index (SCI) to be an up-to-date valuation tool for pure-play, B2B, SaaS businesses. As of June 30, the median SaaS valuation multiple for public companies stands at 11.4x ARR. Applying the historical private company discount of 28%, the median valuation multiple for private SaaS companies is currently 8.2x ARR.

There are more options than ever for SaaS businesses to borrow money today. Whether or not your company is profitable or formally venture-backed, and what your specific goals are with the debt will determine which lender and structure is best for your company.