Winter, and a Recession, Are Coming

It’s almost Halloween and we’ve only been into autumn for a month, but the air is crisp — frosty even — and Arapahoe Basin ski area is already open.  Winter is coming!

There’s something else coming, although the exact timing is harder to predict: an economic recession.

While the media and some presidential candidates in both parties report that things aren’t going well in the US, make no mistake – we have been in a robust growth cycle for the last seven years.

But many have argued that the recovery has been financial, that wealthy people with money in the stock market are the only ones benefitting. This was originally labeled a ‘jobless, stock market-only recovery,’ but it has turned out to be anything but.

Now let’s look at all non-farm payroll employees, in thousands and seasonally adjusted, from 1998 to present.

Source:  Bureau of Labor and Statistics

But then we heard about wage stagnation, and that’s justifiable – until about a year ago real wages really hadn’t increased in 15 years. But in the last year, real wages have steadily climbed to all-time highs as well. 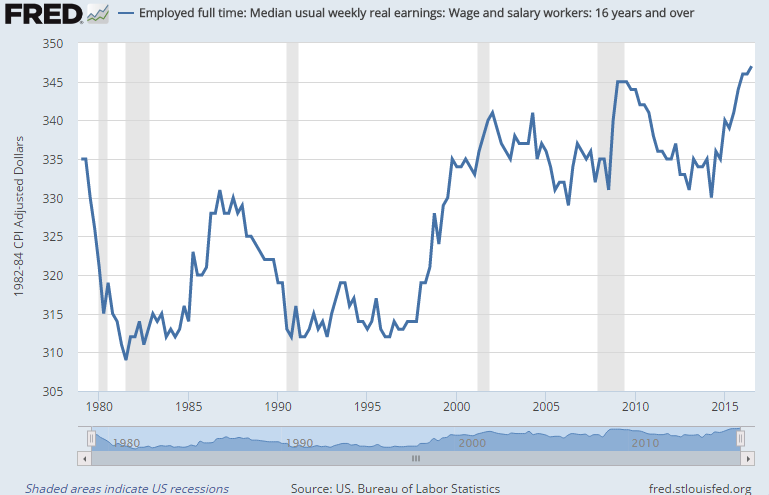 So by all accounts, our economy is doing great!

It’s going to end! It always does. Unless you believe that the business cycle is not a thing, growth periods are followed by retraction periods, and then the whole thing repeats, usually with growth stronger than the retractions and lasting longer, thus increasing the economy over time, albeit in a ‘three steps forward, one step back’ kind of way.

So there will be another recession. No one knows when, but the smart money is on ‘sooner’ rather than ‘later.’ Here is real GDP growth since the late 1940’s through Q3 2016. Shaded areas are recessions. 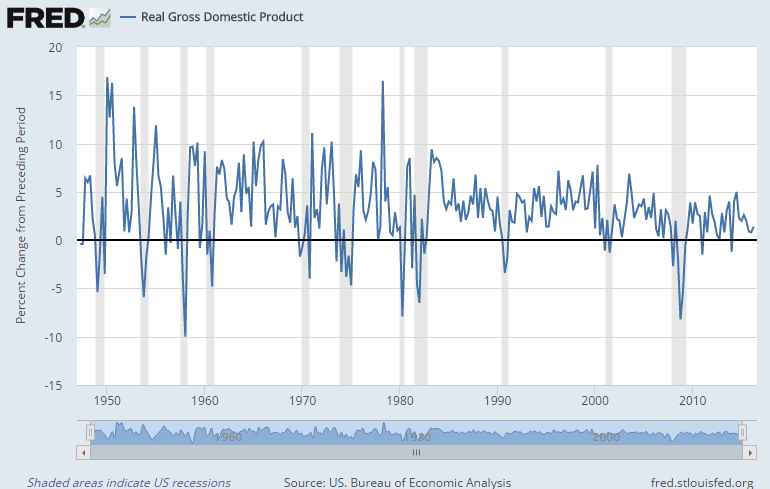 The Great Recession officially ended in Q3 2009, so we are now into our seventh year of economic expansion.

Since 1950 there have been 11 expansion periods, with the shortest at just one year and longest ten years. The average length of growth periods over the last 70 years is 5.3 years and the median is 5 years.  Four out of the eleven expansion periods were 7 years or longer (7, 8, 9 and 10 years each).

So, a recession is coming. We don’t know when. But history tells us it’s very likely to be sometime in the next 3 years, with a chance of longer if this is to be the longest growth period of the last 70 years.

Specifically, for SaaS companies, it might be a good time to start considering ways to recession-proof your business. Focusing on customer retention, always a good idea, is particularly critical when customers are looking to cut costs. To the extent possible, diversifying customers across industries and geographies, including international, can help mitigate macroeconomic risk, and lastly, financially, the timing is good to ensure your company is adequately capitalized for the medium term and that costs are easily managed.

How Do SaaS Companies Perform in a Recession?

To enhance our understanding of the SaaS business model and better prepare ourselves and our portfolio companies for an eventual economic downturn, we wanted to learn how software-as-a-service companies performed through the previous recession.

Over the last year or two many of SaaS Capital’s portfolio companies have initiated channel sales strategies, and many more are contemplating it. Given the trend, this was the focus topic at a recent portfolio company CEO roundtable.