How Do SaaS Companies Perform in a Recession?

The bull market of the 2010s is one of the longest in post-World War II history. When the expansion started in mid-2009, two-thirds of the ~950 SaaS companies that responded to our recent survey had yet to be founded, and it’s likely that many of those that were, weren’t true SaaS solutions at the time. It’s been a long expansion cycle, and SaaS isn’t that old.

While predicting the start of the next recession is impossible, we know there will eventually be one. To enhance our understanding of the SaaS business model and better prepare ourselves and our portfolio companies for an eventual economic downturn, we wanted to learn how software-as-a-service companies performed through the previous recession.

There were 17 public SaaS companies prior to the start of the Great Recession. One of those companies, Omniture, was acquired by Adobe in 2009, but the other 16 all remained in business and independent through the downturn and into the recovery.

We gathered quarterly revenue and operating expense data on those companies for 2006 through 2011. This time period provides performance trends for a couple of years prior to the mid-2008 crash, through the recession, and then a couple of years into the expansion.

(See below to download an Excel workbook of the raw data we compiled from SEC filings and used for this analysis.)

Looking at the data, the first thing we notice is how much of an outlier Salesforce was (and, really, still is). We included its data in the analyses below and in the downloadable dataset but excluded it from the two charts to the right, as it is about 10x the size of the other 15 companies. 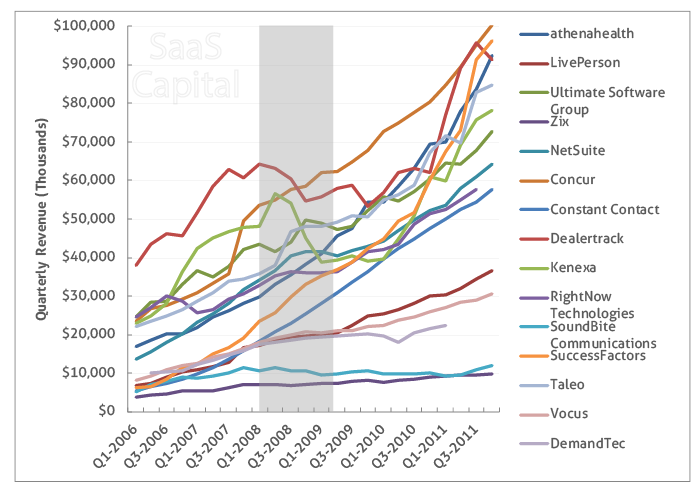 The chart above shows the quarterly revenue for the other 15 public SaaS companies from 2006 through 2011. (We shaded the Great Recession gray in the charts for context.)

The bottom below shows the operating income or loss, excluding large non-cash goodwill expenses, for the same companies and period. 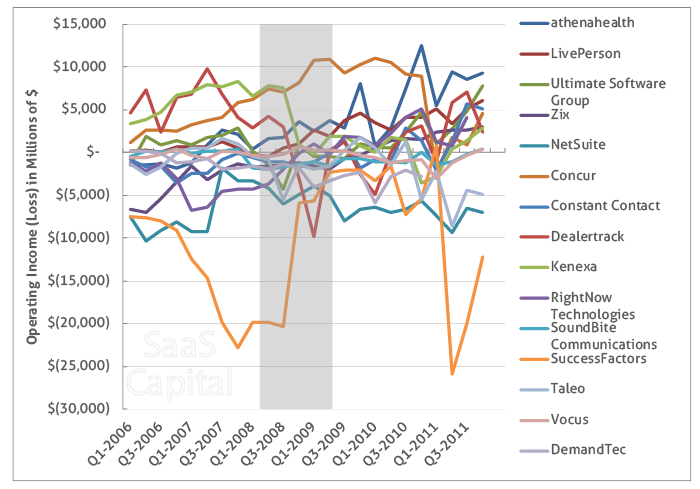 There are some interesting anecdotes to see in the charts above, but it is hard, particularly in the second, to see the overarching trends. Below is a chart of the aggregated average annual growth rate and average quarterly income or loss as a percent of revenue for the 16 companies. 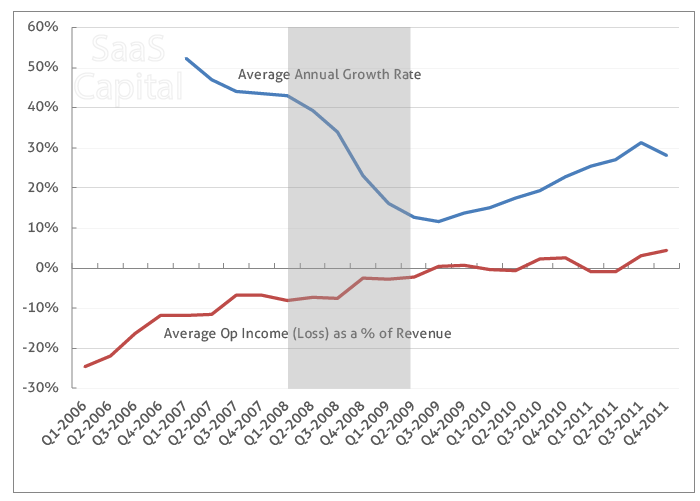 The takeaways from the data and charts are:

Overall: The SaaS model is resilient to economic downturns. No company became insolvent or declared bankruptcy, and actually, over 80% of the companies continued to grow through the recession and were able to achieve profitability in fairly short order.

Growth: The decline in growth rates was substantial, from 40% on average just prior to the recession, to 10% by the time it ended. Some of this decline follows the natural growth curve of a maturing SaaS business, however, the recession essentially put a kink in that curve which then rebounded to a more normal level of 30% a few years after the recession ended.

Profits: The impact of the recession on the bottom line is less clear.  These companies were generally trending toward breakeven prior to the recession and continued on that path during the recession. It is important to note, however, that most of these businesses had relatively recently completed their IPO and had strong cash positions.  They could generally afford to grow their way into profitability as opposed to cutting staff.

Growth and Profits: Slower growth companies were generally closer to breakeven before the recession, and transitioned to positive territory more quickly when it hit.  They also remained profitable after the recession.  Higher growth companies took longer to transition to breakeven, and they also quickly transitioned back into a burn position soon after the recession ended. This behavior seems to be a real-world manifestation of the Rule of 40 hypothesis that you either need to be growing quickly or making money.

Cyclicality: Of the three public SaaS companies that actually shrank in the recession, one sold exclusively to auto dealers, one was a recruiting application, and one was an advertising platform. It’s clear the SaaS business model will not completely insulate businesses that have a cyclical product or who sell into highly cyclical industries. Cyclical sensitivity is a double-edged sword, however, as on average the three companies that shrank during the recession were growing faster than the other 13 companies and were already profitable before the economic downturn. Further, their growth rates recovered faster and to a larger extent.

Our Results: SaaS Capital was founded in 2007 and funded three companies prior to the recession. These companies behaved in a manner consistent with those in the public market.  If they were low on cash, they transitioned to cash-flow positive quickly, and if not, they did so more gradually while maintaining a higher growth rate. Also, what they sold, and to whom, mattered greatly relative to the impact of the macro-economic slowdown.

A recession will slow the growth of an “average” SaaS company substantially. In the 2008 recession, the growth rate for arguably the best SaaS companies in the world (by virtue of them being public) fell from 40% to 10%.

While the SaaS business model insulates companies from wild swings in revenue and profits, it does not make them immune, and cyclicality will negatively impact those SaaS companies with natural ties to cyclical industries or cyclical business functions.

Lastly, as evidenced by the performance of Salesforce, SuccessFactors, NetSuite and several of our portfolio companies during the Great Recession, well-performing companies can excel regardless of economic climate.

From an operator and investor perspective, it will be important for companies to anticipate the likely impact a recession will have on their specific business and to be in a position to move quickly and intentionally when one occurs.  As was shown in the data here, the SaaS business model is resilient, but not bulletproof. 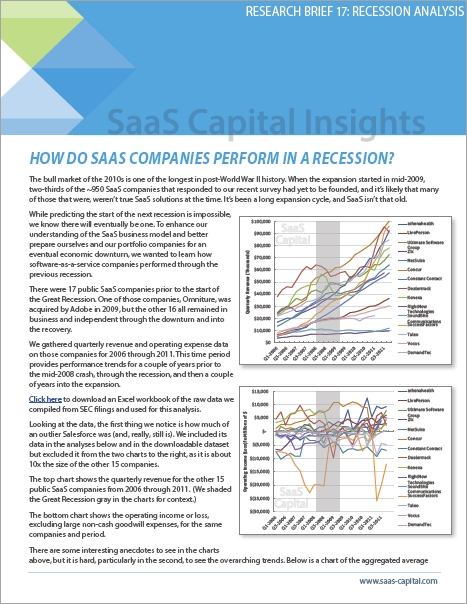