Choosing the right debt structure for your company

SaaS Capital's® Committed Credit Facilities are an effective solution for many, but not all, SaaS companies. When determining which SaaS funding approach is best for your company, consider these two questions:

The software lending landscape can broadly be divided by the answers to these two questions. 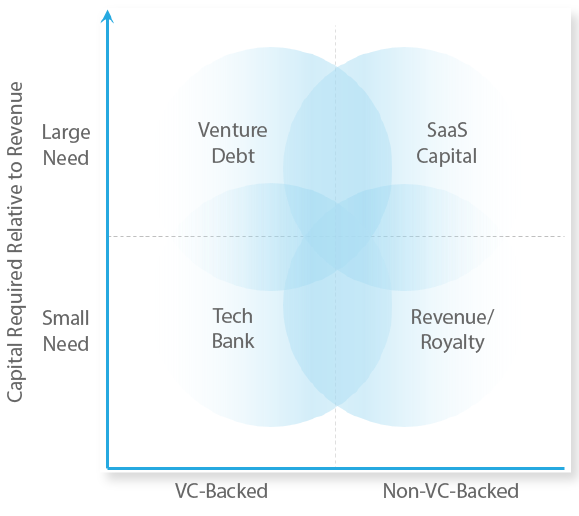 If the amount of capital required relative to the size of the company is modest, typically three times monthly recurring revenue (MRR) or less, a line of credit from a bank is the best option. They are cheap, generally available, and solve short-term and seasonal cash flow smoothing. Royalty-backed structures are also an option for modest needs.

If the desired amount of capital is larger and more strategic (above 3x MRR), your equity-backing status becomes more relevant. If backed by an established VC, your company will have access to a range of debt options from banks, venture debt providers, and SaaS Capital. You may wish to explore options with all of them. If your equity backing is more in the angel or bootstrapped category, banks will remain more conservative (small line of credit), and most Venture Debt firms will not be an option at all. Options for these businesses generally come from revenue-based lenders for smaller transactions, and SaaS Capital for larger transactions.

Once you have determined the appropriate quadrant in the above graph, you can then begin comparing and contrasting the available options.

If bank financing is a good fit, it is likely that the structures will be similar between banks, and the selection process will focus on interest rates and covenants, and possibly personal relationships and guarantees.

If longer-term growth capital is the goal of the financing, then your focus will be on growing the business for as long as possible to generate the highest possible enterprise value before an equity event (sale or fundraising). In these situations, amount and structure become the dominant considerations. If one structure can support an extra year of additional growth compared to another option, the enterprise value created in that year (4 to 6 times the incremental increase in annual recurring revenue (ARR)) will far outweigh any differences in cost between the two options. 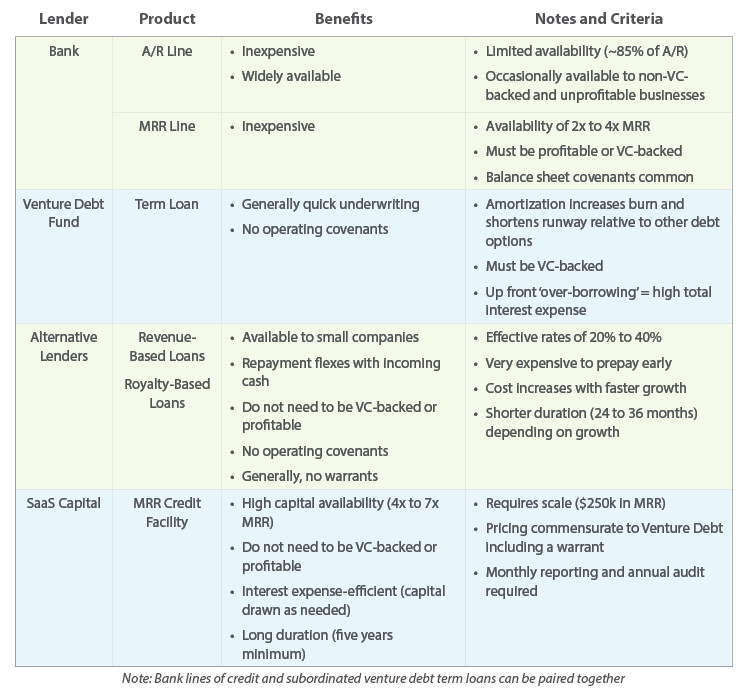 Bank lines are designed to manage short-term fluctuations in a company’s cash flow. They are inexpensive and typically provide capital availability equal to a couple months’ worth of revenue either through a percent of accounts receivable outstanding (~85%) or, the tech-focused banks will base availability for SaaS companies off a multiple of monthly recurring revenue (2x to 4x MRR). If you have the option to choose one over the other, the MRR-based structure is better for SaaS companies because it makes for a more stable borrowing base, and typically provides more capital availability than a percent of A/R.

These facilities are great for short-term cash flow smoothing but are not designed to be used as long-term strategic growth capital. They are typically renewed annually, and if not renewed, the money is due upon expiration.

With bank lines, a key thing to focus on is the covenants. The covenants are reset annually, and most banks will either look for balance sheet support for repayment (liquidity covenants) or, if company cash reserves are running low, they will look for operating profits (positive EBIT covenants). These covenants don’t diminish the usefulness of the line for cash smoothing, but significantly reduce the usability of the facility to invest in long-term growth.

Venture debt term loans are generally available to companies that have recently raised a bonafide institutional equity round. Venture lenders are underwriting the VCs as much as the company, and for that reason, diligence is typically light. The advance rate on venture debt is typically high with few, if any covenants and the rates are in the low double digits or high single digits plus warrants.

The benefit of taking venture debt with an equity round is access to more initial capital with less dilution. The drawbacks are twofold. Since all the money is borrowed up front, total interest expense is significantly higher than with a line of credit, and most of the borrowing is done when the company needs it least, having just raised a VC round. Second, when the loan amortization commences, typically after a 6- to 12-month interest-only period, it accelerates burn. Depending on the loan’s amortization schedule and the company’s use of cash, the venture debt loan may not extend the company’s runway much at all. A good way to think about the value and cost of debt financing is “cost per month of runway extension.”

Venture debt term loans have their place. They are a quick source of capital that come with very few strings attached. They have their highest and best use if the company is burning a lot of capital, and it has a short window to an exit. They are less well-suited for financing longer-term growth, and they create the need to refinance frequently.

A combination of a bank line and subordinated term loan is appealing because the blended rate is moderate, and the capital availability is moderate-to-high. The term loan still creates “over-borrowing” on the high-priced portion of the capital and therefore has higher total interest expense than would one single, larger line, but not as much over-borrowing as a single venture debt term loan. Having both a senior and junior lender adds complexity in the form of the intercreditor agreement and two sets of reporting, covenants, and also twice the due diligence. It is also standard practice for the two debt instruments to cross-default if the other’s covenants are violated, tying the flexibility of the entire structure to that with the most restrictive covenants. We see this structure most commonly used when the combined debt is $10 million or more. At that point, the blended lower interest rate justifies the higher transaction and monitoring costs of having two lenders.

Revenue-based or royalty-based finance (RBF) has been around for a long time for projects that required high upfront investment to then secure a future recurring revenue stream. Examples include oil wells, pharmaceuticals, and movies. Over the last ten years, RBF has entered and rapidly grown in the tech finance market, and there are now several capital providers offering the structure.

The chief benefits of RBF are that it is available to companies that may not qualify for bank financing, and the payments are tied to incoming cash, so repayment is flexible -- in lean revenue months payments are lower, while in flush months the loan is repaid faster. Beyond that, the structures offered by different RBF lenders can vary significantly, be quite complex, and sometimes not even be classified as debt.

The most common structure is essentially a term loan, with the full amount advanced up front, with monthly or quarterly payments calculated off of a fixed percentage of cash receipts from the prior period, typically 3%-10% (to be clear, this is not the interest rate!).

The payments essentially include both principal and interest and accumulate towards a total return amount, denoted as a multiple of the initial loan amount; 1.5x to 2.5x is common. RBF loans can also include warrants, success fees, or smaller, indefinite royalty tails.

The cost of an RBF loan is not intuitive as it does not have a stated interest rate. If your company is considering an RBF loan, you must estimate the cost of capital yourself by inputting assumptions into an (effective interest rate) Excel model such as this one. The IRR on most RBF loans falls into the 20% to 40% range. This structure works well for very early-stage or highly seasonal companies where revenue is unpredictable. For more established companies with more predictable revenue and growth rates, RBF loans tend to be too expensive.

Any follow-on investments are separately negotiated and must again pass credit committee, so RBF loans are dependent on the future economy, company performance, and investor fund status. Lastly, pre-paying or refinancing these deals is expensive. In the event of a sale of the business, equity financing, or refinancing to cheaper bank debt, the full return multiple of the borrowed amount is typically due.

There is some confusion in the marketplace about the similarities and differences between revenue-based loans and MRR-based loans. Revenue-based loans almost always refer to a loan where the monthly payment is based on a percent of revenue (technically cash receipts). MRR-based loans offered by tech banks and SaaS Capital are traditional lines of credit (payments are based on the amount borrowed and an interest rate), where the amount available for the company to borrow is based on a multiple of revenue. One is a royalty repayment structure; the other is traditional debt.

SaaS Capital’s monthly recurring revenue (MRR)-based credit facilities are committed credit lines available to both venture-backed and non-venture-backed B2B SaaS companies. The borrower draws the capital as needed over a two-year period, and then repays over an additional 3 years. The advance rates are moderate to high (typically 4x to 7x MRR), and the line is typically used in lieu of a small equity round. The MRR multiple is fixed for the life of the facility, but it applies to the ever-growing level of MRR. The MRR facility has two main structural benefits: it reduces overall borrowing costs by allowing the money to be drawn just as needed, and the amount available to be borrowed goes up formulaically over time as MRR grows. The facility is initially committed for two years and can be renewed indefinitely. Should the borrower choose not to renew, no refinancing crisis is created; instead, the outstanding amount is amortized gradually over an additional three-year period.

Costs are higher than bank lines, generally about the same as venture debt term loans, but less expensive than revenue-based loans. Only businesses with a true SaaS model can access this type of capital, and the companies must be of sufficient scale (above $3 million in ARR).

The SaaS Capital structure is designed to provide significant availability over a long period while reducing overall interest expenses. Many SaaS businesses have used the facility to grow revenues for 3 or 4 years, and, in aggregate, have created hundreds of millions of dollars in equity value in the process.

In conclusion, there are more options than ever for SaaS businesses to borrow money today. Whether or not your company is profitable or formally venture-backed, and what your specific goals are with the debt will determine which lender and structure are best for your company.