So, What Do You Think My SaaS Company is Worth?

I had an entrepreneur ask me a few weeks ago – “What are SaaS companies ‘going for’ these days?” I said, well, it depends on a number of factors, but 5 times annual run-rate revenue is average. His response was – “What? You have to be kidding me! Last time I checked they were going for 10 times revenue!”

And so it goes; the opaque, confusing, and highly volatile practice of valuing a private SaaS business is frustrating for entrepreneurs and investors alike. Furthermore, the lack of transparency adds a tremendous amount of friction to a capital raise or the sale of a company.

The reality is, it’s not all that hard to get a quick read on your SaaS company’s valuation.  The two most important things to know are: what are public SaaS companies “going for” at the time, and how fast is your business growing relative to its peers. These two things will get you 75% of the way to an answer, and three or four other metrics will get you the rest of the way there.

The average public multiple is easy to get and it should always be updated when getting a read on valuation. The chart below shows the historical trend, but go here to pull the most recent data. Make sure to get the revenue multiple based on the current year expected revenue.

Once you have the most recent multiple, subtract 1.3 to get the current private multiple based on ARR** (annualized run-rate revenue). Private multiples are lower because they are generally riskier and the stock is not easy to sell. If the public multiple were 7.0 times revenue for example, then the average private ARR multiple would be 5.7 times.

Building from there, the key company-specific metric is revenue growth rate. But it gets a little tricky here because to get a higher multiple, your company must be growing faster than other similarly-sized SaaS companies. It’s easier to grow quickly when a company is small, and so the growth premium varies by company size.

The chart below shows the average growth rate for different sized private SaaS companies based on the 2016 SaaS Capital survey of 400 companies, and this should be used as your benchmark. If your company is growing faster than average for its size, the business will be worth more than the 5.7 times calculated above, and if it’s growing slower, it will be worth less. 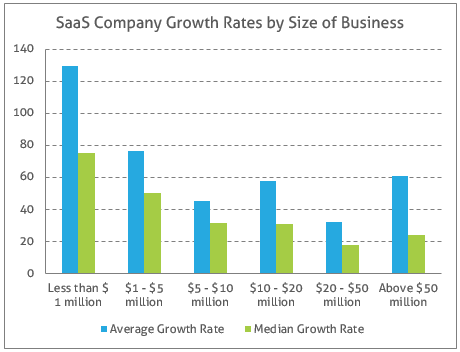 How much of an impact the growth rate has on valuation can be estimated based on public SaaS company values. A rule of thumb would be if your business is growing at twice the average rate, the valuation multiple would grow by 50%. For example, a $3.0 million SaaS company growing at 100% (twice the rate of its peers) would get a growth premium of 2.8 (50% of the baseline multiple of 5.7), making it worth about 8.5 times revenue, or $26 million dollars. Similarly, a $60 million SaaS business growing at 50% is also growing twice as fast as its peers, and would also garner a similar growth premium.

There are four other metrics that will impact a company’s value beyond the current state of the public market and its growth rate. They are:

Do better than “average” on these factors and the valuation multiple will go up; do worse, and it will go down. The chart below can be used to estimate the overall impact of each factor. 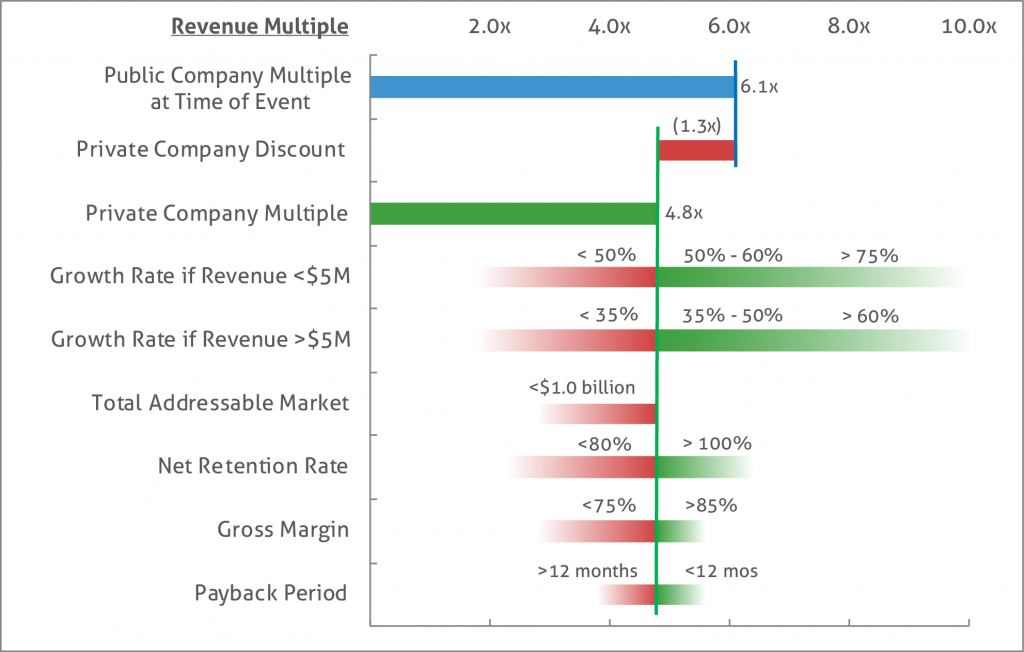 The fact of the matter is, private SaaS companies, on average, were never “going for 10 times revenue,” only a few outliers. The reality is a little less sexy, but still very healthy, and knowing where your business stands based on real-world data will give you an advantage in negotiating the best possible outcome for your company. For a more detailed look at this topic, download the full white paper “How to Value a SaaS Company.”

**Based on an analysis of hundreds of private company exit multiples tracked by the 451 Group over 2014, 2015, and 2016, and compared to the public SaaS valuation data at the time.

What is a “Good” Retention Rate for a SaaS Company?

Over the years, we have analyzed thousands of SaaS companies and we firmly believe the best metric for benchmarking churn is gross revenue retention which should be benchmarked against companies with similar annual contract values or revenue values per customer.