KCSaaS Event and SaaS in the Midwest 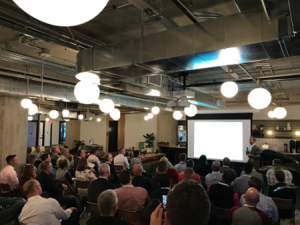 Last month I had the pleasure of presenting at the KCSaaS event in Kansas City, MO. KCSaaS is a grassroots industry group spearheaded by longtime SaaS sales executive Mike Poledna. He started the group about a year ago after not finding many SaaS networking and knowledge share opportunities in Kansas City. He and I would agree, however, that that does not mean there aren’t great SaaS companies in Kansas City and other Midwestern cities.

We have funded numerous companies in “fly over” states, with all of them growing and performing well, and several of them having very successful exits. One of our portfolio companies even proved that you don’t have to be in the Valley to be a unicorn – CoverMyMeds, based in Columbus, OH recently sold to McKesson for $1.3 billion.

And that makes complete sense, at least to us. Software is a business model that travels well. Building software doesn’t require a lot of space or any specific equipment. It doesn’t have any geographic requirements like a river or port. Software is relatively easy to build anywhere. And despite what people in the Bay Area may like you to think, there are talented and experienced software engineers everywhere, and the lower cost of living in the Midwest is a huge competitive advantage against San Francisco-based competitors.

I look forward to heading back to Kansas City soon, and we will continue to “drive through,” and not fly over, the Midwest.

3 Reasons for the Increase in SaaS Equity Investment

A couple weeks ago Todd and I had the pleasure of attending the inaugural Kinetic Indiana conference, put on by venture capital firm Elevate Ventures. The conference served as a great reminder that entrepreneurship is prevalent across the entire country including the Midwest.

Last December we sent out a quick year-end recap email and blog post that was very well received, so here it is for 2017.