The Magical Funding Properties of an MRR Credit Facility for SaaS

Ok, well, “magical” might be a little strong, but there are circumstances where this structure does have specific benefits that are very valuable. In the short post below, we describe how to quantify those benefits to your stakeholders.

As described in full detail in our recently published Debt Options Guide there are now several flavors of debt available to different types of SaaS companies, and some are more useful than others. The key point of the article and materials is that the main objective of any debt raised by a SaaS company is to extend its runway for as long as possible. More runway allows the business to grow MRR for longer and thus increase equity value for existing shareholders.

Therefore, to properly assess different financing options, management needs to estimate two things: the number of months of runway each debt option provides, and how much equity value the company creates each month. The value creation equation for shareholders of funding their businesses with debt is:

Let’s assume there is a SaaS company with $330,000 MRR burning $175,000 per month and growing 40% annually, or about $10,000 in new MRR each month. Therefore, every month that goes by, ARR grows by $120,000 and enterprise value increases by $720,000. This assumes a 6x ARR valuation multiple which is reasonable for a company of this size and growth. The net equity value (as opposed to the total enterprise value) will increase each month by $720,000 less the $175,000 in incremental debt required to fund the business for that month, less the interest expense for the debt. Assuming a 15% annual interest rate, the monthly interest expense would be about $1,750. So, in this example, the business creates about $540,000 in value for its shareholders every month it is funded by debt.

The Guide and accompanying spreadsheet describe the runway extension capacity of different debt structures including term loans, royalty-based structures, and MRR lines. Not surprisingly, since MRR lines grow in availability as MRR grows, they provide the longest runway extension.

By way of example, let’s look at our company above. If this business had an MRR-based credit facility offering 6x MRR in capital availability, it would have initial availability of $2.0 million which it could draw down as needed. And because the business is adding MRR at the rate of $10,000 per month, it is creating additional borrowing availability of $60,000 per month (6x new MRR). So, from a runway extension perspective, the net cash usage is $175,000 – $60,000 – interest expense. In this example, the Credit Facility would fund the businesses for about 17 months and provide over $3 million in available capital by that point in time. 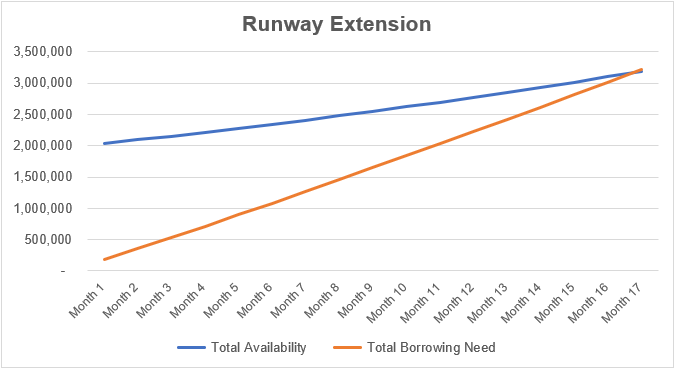 What is even more interesting, however, is when a company has growth and burn dynamics such that an MRR line becomes a self-funding source of growth capital. If the business in the example above maintains a 40% growth rate but decreases its burn after 12 months to $100,000, the growth in monthly borrowing availability converges with the borrowing need, and the runway extension could be theoretically infinite. We call this combination of growth and burn the “Goldilocks” scenario, and it is a highly accretive way to build a SaaS business. 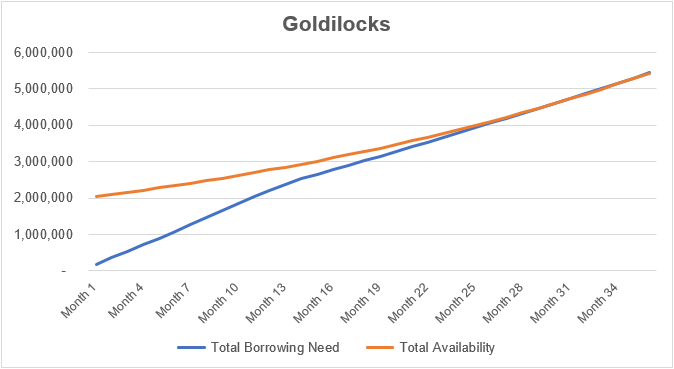 At SaaS Capital, we have had several borrowers in Goldilocks mode, and they have funded the growth of their businesses from $3 million in ARR to over $12 million in ARR (with some still growing) with nothing other than an MRR credit facility. Equity value created thus far in these scenarios is somewhere between $35 and $65 million per company and exceeds the cost of the debt by at least 20X.

It’s not always possible to steer a SaaS business into this particular dynamic. However, it is a much lower bar than the famous Rule of 40 and a fantastic option for companies operating in smaller markets. And if you can find the Goldilocks zone, there is absolutely no better way to fund the businesses. It’s almost…magical.