When I first heard about the Lifetime Value (LTV) to Customer Acquisition Cost (CAC) metric many years ago, the economics major in me got very excited. I was already well into the SaaS financing business at the time, and this ratio seemed like the most elegant way to express how the business model really worked. It is the unit economic driver of value and profits that is obscured by normal GAAP financials.

That said, we noticed an interesting phenomenon when we went to benchmark the LTV data from our 2018 SaaS company survey:

That makes LTV calculation highly sensitive to retention rates approaching 90% and above. (See graph below which depicts LTVs for a $4,000 ACV, 80% gross margin, SaaS company across various retention rates.) 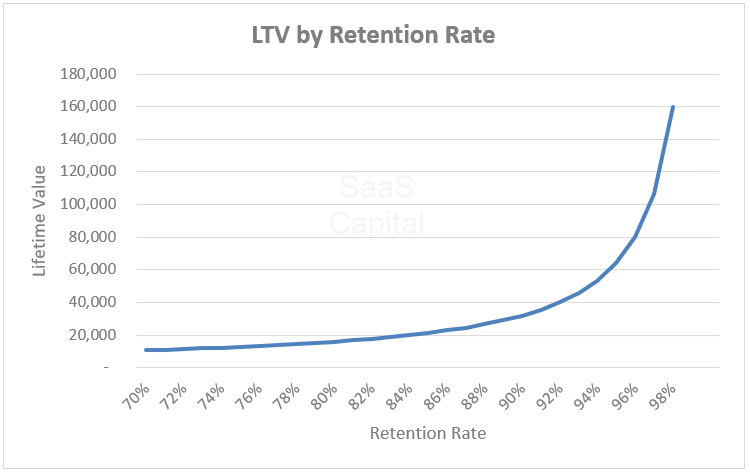 By way of example, the calculated LTV of a customer doubles when the retention rate increases just 3 percentage points from 94% to 97%. Even at lower retention levels, such as the difference between 86% retention and 90% retention, the LTV increases 40%.

We know from all our borrowers and prospects, retention rates bounce around a fair amount month-to-month and quarter-to-quarter, and that variability, combined with the sensitivity in the formula, drives inconsistent output in the CAC to LTV ratio, and frankly, makes it less useful. In addition, as we have previously reported, retention rates in SaaS businesses tend to decline over time as companies and customer bases mature. (See Research Brief 12: Churn Benchmarks for B2B SaaS Companies for more information.) This means that in the early years of a SaaS company, the customer LTV can be dramatically overstated relative to its true value over time.

Our first recommendation would be to add some conservatism to the assumed retention rate.  This is both because rates tend to decline as a company matures, and because the LTV is so sensitive to retention rate.  A simple approach would just be to cap it a few points below your company’s actual long-term experience and also probably never assume anything over 92% or 93%.  Another approach would be to apply a discount rate to the future cash flows. Theoretically, the discount rate would be your weighted average cost of capital, but we would just recommend picking something around 15% and then sticking with it.

Our second recommendation would be to average the retention rate for this calculation over a relatively long period of time, six months or more, to take out some of the noise. We would also not recommend this metric be used weekly or monthly as an operational metric to guide short-term decision making. It is an important, high-level, and fundamental metric, but its sub-components are more actionable for management decisions.

Gross Churn/Retention is a measurement of annual revenue lost from a SaaS company’s installed base of customers, not accounting for cross-sells, up-sells, price increases, or organic account growth.

What to Know About Stock Warrants

Stock warrants are a common component of venture debt, and while typically small in relation to the other overarching economics, they are important because they have to do with the cap table, which we all know is a zero sum game. They also can be confusing because they have a unique lexicon, and what information is on the web about warrants focuses more on the legal and tax ramifications rather than the practical.