The Impact of Gross Margin on SaaS Valuations

Gross margin is one of the most important factors in determining a SaaS company’s performance and valuation, so the lack of a standardized COS definition can result in confusion and debate when an investor is trying to figure out just what a SaaS company is worth. We have reviewed thousands of SaaS company financials, before and after the adoption of ASC 606 (revenue recognition) and ASC 340 (cost recognition relating to contracts), and we have seen the full range of COGS definitions. Through that exposure, we have come up with the recommendation outlined below. This recommendation is derived from three factors:

What is Considered COGS in a SaaS Company?

In terms of cost of services for the core SaaS revenue we recommend the following:

These are all direct and primarily variable costs required to deliver the SaaS application. Generally speaking, if these expenses were not paid, the provisioning of the product and service to the installed base of customers would stop or deteriorate quickly.

Hosting costs should also include all core communication costs, and in the rare instance in which a company owns and maintains the servers used to deliver its product, depreciation on those owned assets. Since the vast majority of software companies now utilize off-site hosting, the need to include a depreciation expense in COGS is a practice we rarely encounter.

Customer/technical support and customer success should include the salary and other direct costs of the CS team that is primarily focused on retention and renewals. The portion of the CS team’s effort that is spent on upselling and cross-selling should be in its own operating expense line of included in sales. The salaries of the team responsible for keeping the production instance of the software up and running should also be included in COGS. All other R&D expenses should not be in COGS.

About those professional services…First off, if your company has more than a negligible amount of professional services revenue from implementations or ongoing services, it is a good idea to report those costs and revenues separately. Implementation is a different business than the ongoing provisioning of a SaaS product, and a company should not mix the revenue and cost of each because it obscures the core economics of both businesses. Without knowing a gross margin on just SaaS license revenue, things like CAC Ratios cannot be accurately computed. Also, a SaaS business should absolutely know if it is making or losing money on professional services, and it should be doing so intentionally.

The above definition is most consistent with what we see day-to-day and provides management with a solid view of the company’s contribution margin. Management can then decide how to invest that contribution margin back into sales, marketing, and product development on a discretionary basis.

What Should Not be Included in a SaaS Company’s COGS

Things not to be included in COGS that we sometimes see included are:

We also discourage the allocation of other overhead costs into COGS. These are not direct variable costs, and allocation processes are time consuming and generally inaccurate.

Note: A version of this post was first published in 2017, and this was updated in 2021 to reflect current best practices. For more on SaaS accounting best practices, please see: What Should a SaaS Income Statement Look Like? 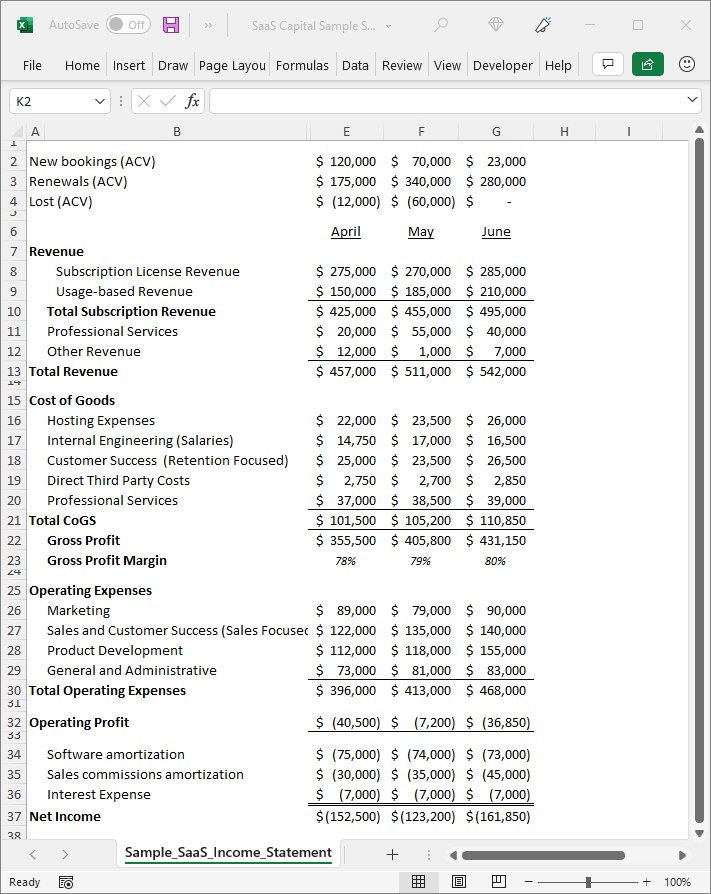 What Accounting Method Should My SaaS Company Use?