When we founded SaaS Capital in 2007, the debt options available to software companies were generally limited to accounts receivable lines from banks and venture debt term loans to venture-backed businesses. More than a decade later, using debt to fund a SaaS company is more accepted, and there is now a vibrant market of lenders to software companies.

It’s great that there are so many non-dilutive options available to entrepreneurs, but with choice comes complexity. Each lender has its own specific criteria, use cases, and non-trivial nuances in structure which makes it difficult to know which one is best for your company. But first, let’s discuss the overall benefits of debt.

The key benefit of debt to a SaaS company is providing it with incremental cash runway during which time it can create equity value for shareholders. The cost of the debt is then subtracted from the total value created to determine the increase in net equity value.

Therefore, to properly assess different options, management needs to estimate two things: the number of months of runway each debt option provides, and how much value is being created each month. The value creation equation for shareholders of funding the businesses with debt is:

To better understand this equation and the runway impact of the different debt options discussed below, let’s use a real example. Let’s assume there is a SaaS company with $330,000 MRR burning $175,000 per month. This company is growing 40% annually, or about $10,000 a month in new MRR. Therefore, every month that goes by, ARR grows by $120,000, and enterprise value increases by $720,000, assuming a 6x ARR valuation multiple, which is reasonable for a company of this size and growth. (See our white paper What’s Your SaaS Company Worth? for more information.)

The net equity value (as opposed to enterprise value) will increase each month by $720,000 less the $175,000 in incremental debt required to fund the business for that month, less the interest expense for the debt. Assuming a 10% annual interest rate, the monthly interest expense would be about $1,500. So, in this example, the business creates about $540,000 in value for its shareholders every month it is funded by debt.

As noted above, there a number of debt options available to software companies. The focus of this post is on traditional venture debt and how it compares to MRR-based credit facilities. First, let’s explore venture debt.

What is Venture Debt Financing?

Venture debt term loans are generally available to companies that have recently raised a bonafide institutional equity round. Venture lenders are underwriting the VCs as much as the company, and for that reason, diligence is typically light. The advance rate on venture debt is typically high with few, if any covenants, and the rates are in the low double digits or high single digits plus warrants.

The benefit of taking venture debt with an equity round is access to more initial capital with less dilution. The drawbacks are twofold.

A good way to think about the value and cost of debt financing is “cost per month of runway extension.”

Why Use Venture Debt?

Venture debt term loans have their place. They are a quick source of capital that come with very few strings attached. They have their highest and best use if the company is actually burning a lot of capital, and it has a short window to an exit. They are less well-suited for financing longer-term growth, and they create the need to frequently refinance.

A combination of a bank line and subordinated term loan is appealing because the blended rate is moderate, and the capital availability is moderate-to-high. The term loan still creates “over-borrowing” on the high-priced portion of the capital and therefore has higher total interest expense than would one single, larger line, but not as much over-borrowing as a single venture debt term loan. Two lenders add complexity in the form of the intercreditor agreement and two sets of reporting, covenants, and due diligence. It is also standard practice for the two debt instruments to cross-default if the other’s covenants are violated, tying the flexibility of the entire structure to that with the most restrictive covenants. We see this structure most commonly used when the combined debt is $10 million or more. At that point, the combined amount of capital accessed justifies the higher transaction and monitoring costs of having two lenders.

To a large extent, this is where borrowing by SaaS companies originated. The general idea is a company could raise $5 million in a Series B, and $2 million in venture debt, and have a $7 million financing for the dilution of a $5 million round.  This is all mathematically true and sounds good. However, the incremental $2 million might have little actual use to the business.

Said differently, if the $5 million of cash from equity (or cash on hand) would have funded the business for 20 months, how much longer can the business go with the debt in place, and how much equity value is created during that incremental period?

To illustrate, let’s use our example company above, with a 36-month term loan at 10% annual interest.  When you run out the math, the $2,000,000 in debt doesn’t provide the company eleven months of extra runway like one might think; it only provides an additional single month, from 28.5 total months to 29.5 months. 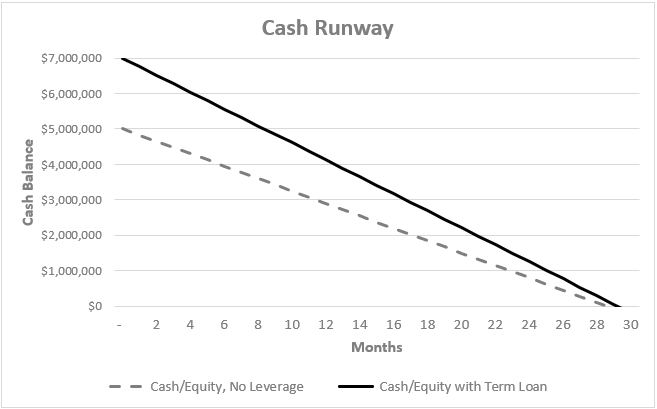 Why so little actual runway extension? Simply put, the business will have paid back almost all the principal and much of the $325,000 in interest expense by the time it actually needs the cash.

Even if the loan had a six-month interest only period and then 36 months of amortization, the runway extension would be two months instead of just one. The principal deferred over the six months for this loan is only $280,000, or about one and a half months of burn, which is then partially offset in higher interest expense from the longer loan and higher outstanding balance during the first six months.

Interestingly, the incremental runway extension capacity of a term loan increases if the company’s burn is higher because less of the debt has been amortized away by the time it’s needed. The total runway, however, is obviously shorter with a higher burn rate.  Incremental runway from the debt is also increased as the ratio of debt to equity raised increases, but the higher the debt to equity ratio, the more difficult the loan will be to source.

The use case for venture debt is runway extension to a venture capital equity raise with the key drivers being:

What are MRR-Based Credit Facilities?

In contrast to traditional venture debt, SaaS Capital’s monthly recurring revenue (MRR)-based credit facilities are committed credit lines available to both venture-backed and non-venture-backed B2B SaaS companies. The borrower draws the capital as needed over a two-year period, and then repays over an additional 3 years. The advance rates are moderate to high (typically 4x to 7x MRR), and the line is typically used in lieu of a small equity round. The MRR multiple is fixed for the life of the facility, but it applies to the ever-growing level of MRR. The MRR facility has two main structural benefits:

Costs are higher than bank lines, generally about the same as venture debt term loans, but less expensive than revenue-based loans. Only businesses with a true SaaS model can access this type of capital, and the companies must be of sufficient scale (above $3 million in ARR).

The SaaS Capital structure is designed to provide significant availability over a long period of time, while reducing overall interest expenses. Many SaaS businesses have used the facility to grow revenues for 3 or 4 years, and, in aggregate, have created hundreds of millions of dollars in enterprise value in the process.

Credit facilities that can be drawn down over time and where the amount available to be borrowed is formulaically tied to MRR are typically better structures for most SaaS companies than term loans because they extend the cash runway much further.  As mentioned in our Comparison Guide of Debt Options for SaaS Companies, some of the tech-focused banks offer this structure to VC-backed companies, and SaaS Capital offers this facility to venture-backed and non-venture-backed companies. In addition to the runway extension benefit, MRR facilities are interest expense efficient because dollars are only borrowed as needed.  Structured properly, and with the right growth and burn dynamics, MRR facilities can offer almost unlimited runway extension.

By way of example, let’s look at our company above again.  If this business had a credit facility offering 6 times MRR in capital availability, it would have initial availability of $2.0 million just like the term loan, but because the structure is a line of credit, the company wouldn’t have to draw it all at once, but rather, could draw capital down only if and as needed, saving on total interest expense. 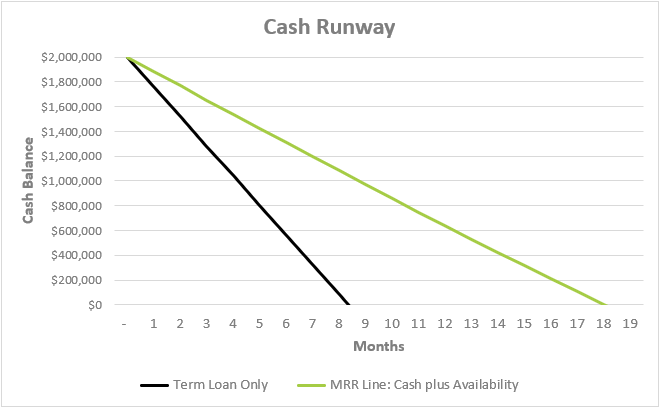 Because the business is adding MRR at the rate of $10,000 per month, it is creating new borrowing availability of $60,000 per month (6 times new MRR).

So, from a runway extension perspective, the net cash usage is $175,000 – $60,000 – interest expense. In this example, the MRR-based credit facility would fund the businesses for 18 months and provide over $3 million in available capital by that point in time.

If the business moderated its monthly cash burn to $100,000 by month 18, growth in borrowing availability each month would exceed the burn rate, and the runway extension could be theoretically infinite. Or the company could increase its burn over time and not run out of cash due to its growth in MRR and thus availability. This is what we call the self-sustaining “Goldilocks” scenario, and it is the highest and best use of an MRR facility.

At SaaS Capital, we have had several borrowers fund the growth of their businesses from $3 or $4 million in ARR to over $12 million (and still growing) with nothing other than an MRR credit facility.  Equity value created thus far in these scenarios is somewhere between $35 and $65 million and exceeds the cost of the debt by at least 10x.

The use case for MRR-based credit facilities is long-term (equity alternative) growth capital for steady growth, moderate burn companies with the key drivers being:

In conclusion, there are more options than ever for SaaS businesses to borrow money today. Whether or not your company is profitable or formally venture-backed, and what your specific goals are with the debt will determine which lender and structure is best for your company. For additional information about SaaS debt options please see:

Preparing a SaaS Company for a Capital Raise

Since creating SaaS Capital to focus exclusively on B2B SaaS businesses, I've now had the opportunity to speak with thousands of SaaS founders and company executives and see the specific challenges SaaS businesses face when raising money.

The Magical Funding Properties of an MRR Credit Facility for SaaS

To properly assess different financing options, management needs to estimate two things: the number of months of runway each debt option provides, and how much equity value the company creates each month.

The following article was originally posted on LinkedIn by Yoav Schwartz, the Co-Founder and CEO of our new portfolio company, Uberflip. It provides a clear example of how debt can be used strategically to fund the growth of a SaaS business.