What Effect Did the ‘Great Resignation’ have on B2B SaaS Companies?

In the 2022 annual SaaS Capital survey, we debuted a new section asking SaaS company founders, management, and investors about their experiences with employee retention — an evergreen topic, but one which rose to particular importance during 2021, the year of the “Great Resignation.”

Since this was our first year asking about the topic, we don’t have trend data — but even the single year in review provided a lot of eye-opening results. Some of these were to be expected, but others jumped out as non-obvious.

Fortune Favors the Bold (and so do SaaS Employees)

Growth is the key to SaaS entrepreneurship — something you’ve heard from us in the past about valuations — so it should be no surprise that the biggest factor driving retention during 2021 was ARR growth rate, with a strong linear correlation. 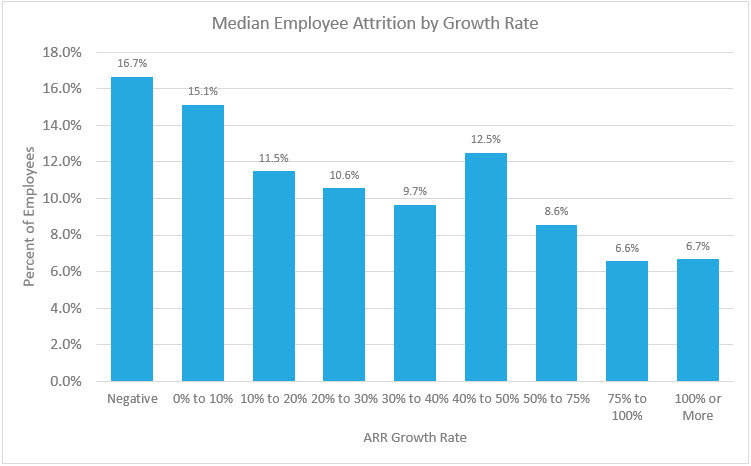 Medium-growth (10-50% annual revenue growth) SaaS companies saw around 11% quits over the year, while companies with less than 10% growth saw an average of nearly 15% of their workforce voluntarily leave during 2021. In contrast, the fastest-growing SaaS companies (annual growth rates over 50%) saw only half as much voluntary turnover as the slowest, around 7.5%. The contrast makes for a clear signal: fast-growing companies, with the greater opportunities for career growth, make for more attractive places to stay and work than do slow growers.

And, while we don’t have year-over-year survey numbers to compare amongst SaaS companies over time, we can say that SaaS companies appear to have much lower voluntary quits than the broad economy. Pundits coined the phrase “Great Resignation” because of an economy-wide increase in voluntary quits from a long-term average of around 20% to around 30%, meaning that all categories of SaaS companies in our survey were more attractive workplaces than the national average. 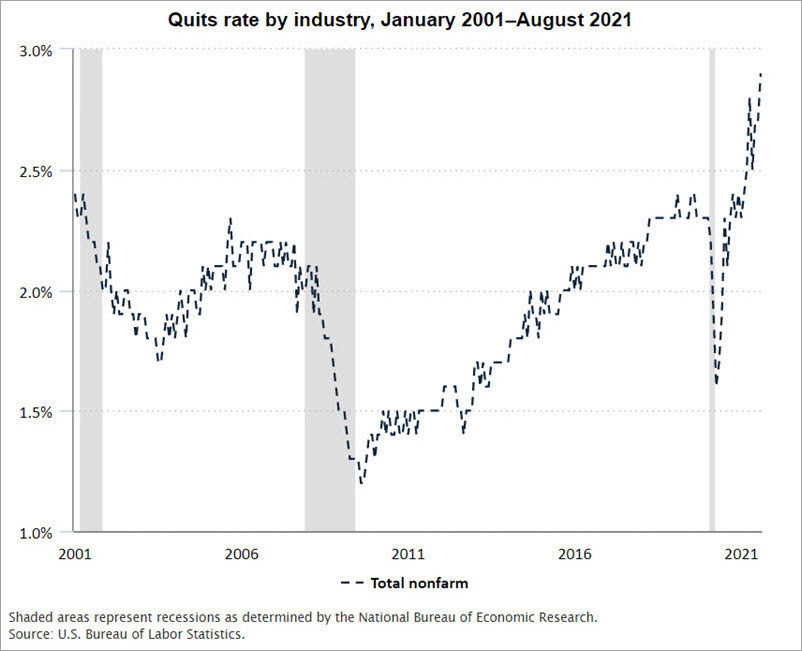 That said, having high growth may reduce some of the pain to a SaaS company of being a buyer in this seller’s market for labor — but it doesn’t eliminate the pain.  The top growth companies in our survey, despite relatively great retention, still had open requisitions for a whopping 18% of their workforce.  That goes with the territory — aggressive growth means aggressive hiring, and often the fastest growers have very small denominators — but it means that such hiring will continue to be a sprint against the wind for even the best.

It’s Not the Size, It’s the Growth

We analyze survey results by company size as well.  This is sometimes tricky, since companies under $1 million in ARR (but greater than zero) could be at wildly different stages — that segment contains founding teams enjoying their first exploratory sales, as well as well-funded operations just about to hit $999k in ARR with solid product-market fit.

Something we conspicuously did *not* see is a meaningful difference in the voluntary quit rate among company sizes between $1 M and $20 M in ARR.  On average, respondents in the four size categories we use in that range all reported about 9% quits (more or less average overall).  We think the big story of this result is that it’s truly growth rate, and not company size, that tends to explain employee retention. 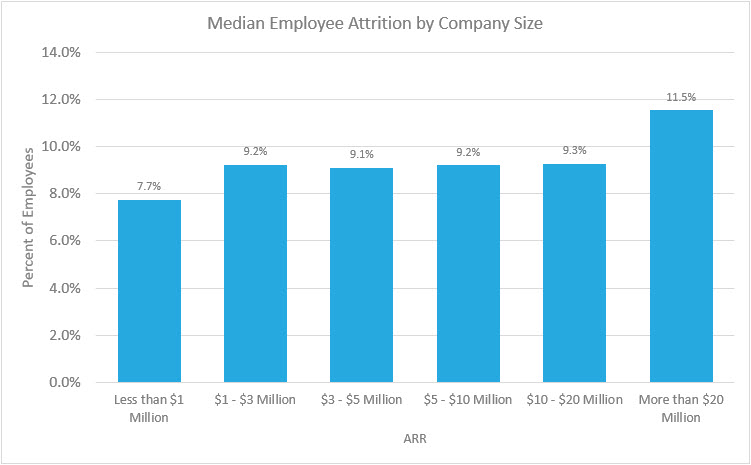 There *was* a meaningfully smaller quit rate for the very small companies (under $1 M) and a higher rate for the largest private SaaS companies (over $20 M in ARR).  This should be viewed along with our consistent observation that company growth rate extremes are higher at the low end (it being much easier to double or triple $100k in revenue than $100 M in revenue), and the fact that sustaining growth rates past the $20 million in ARR gets hard.  Combine those notions, and it’s clear that growth is what’s associated with employee retention.

One finding that holds up reasonably well across different company sizes is that venture capital or private equity backing is not a cure for employees leaving.  In fact, on average and within most size categories, equity-backed SaaS companies reported about 25% higher rates of voluntary quits than did their bootstrapped peers.  (One area where this association does not hold is with very high-growth companies, over 100%, which are also the companies with the lowest quit rates.)

While we don’t have survey data that explains this effect, we can reasonably speculate that bootstrapped SaaS companies had already done some filtering out of pure “mercenaries,” and tended toward having employees with a strong affinity for their team and mission.  That makes sense because a bootstrapped company likely never had been able to match the pay offers of a well-funded company — be it established bigco, or cash-flush VC-backed — yet nonetheless managed to strike a chord with their hires. 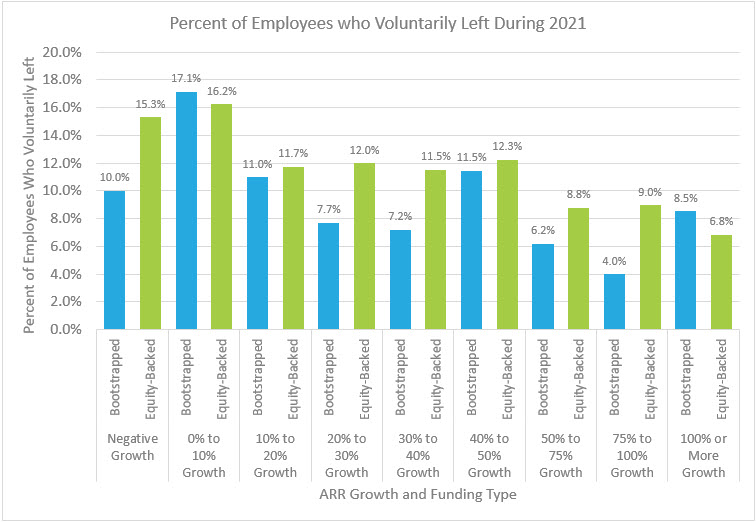 Replacement is Costly, but Not Devastating

A somewhat surprising finding about “backfill” for voluntary quits is that companies in our survey uniformly report a relatively low — about 10% — pay increase was the required amount to backfill a departed employee.  Since we’ve heard bigger figures informally from some large, centrally-located (e.g. SF/NY/Seattle) tech companies, we were surprised at how modest this figure was.  We think this is likely due to the fact that employees choosing small, private SaaS companies are motivated not only by salary but by the prospect of having a larger relative impact working with a smaller team — an interpretation that would jibe well with our findings, above, about growth rates being crucial.  A small team + high growth environment gives exceptional leverage for career and personal development, and SaaS companies that can offer that should lean forward on it.

On median, we've seen the market consistently value private B2B SaaS companies around 5x to 8x ARR over many years, including the last two. Outliers to the high side and low side have certainly existed throughout time, and there were many more (mostly to the high side) over the last two years, but the bulk of valuation events have remained in this range. Growth remains the biggest driver of valuations, and double-digit multiples are more attainable than ever with very high growth, but in 2022, there is more valuation risk to the downside than there is upside exuberance.