The year is off to a rocky start, with lots of uncertainty in the world, public, and private markets. Public SaaS valuations are down nearly 40% from their highs in mid-2021, and the private markets are a mix of concern and restraint, with huge piles of dry capital needing to be deployed.

We think the risk of recession in 2022 is low, but high inflation and rising interest rates will keep markets and public valuations closer to where they are now, rather than anything driving a return to their highs of August 2021. Private valuations will mirror the public markets, with probably more volatility along the way. Strong performers will still have over-subscribed rounds at double-digit valuation multiples, while weaker companies will have a much harder time, and possibly not find financing at acceptable terms at all.

Below we discuss the current and recent public B2B SaaS market and its impact on private valuations.

In August 2021, the median public B2B SaaS company hit a record high value at 16.9x its current run-rate annual recurring revenue (ARR). We use a current run-rate (based off of the most recent quarterly revenue figures) in our valuation calculation because it’s readily available, simple to compare across companies, and is more easily compared to private companies, which likely don’t have as clear a view on what the next twelve months’ revenues might be. At the end of February 2022, the median public SaaS valuation multiple had dropped 37% to 10.7x ARR. Markets have fallen further then rebounded some through March and April. 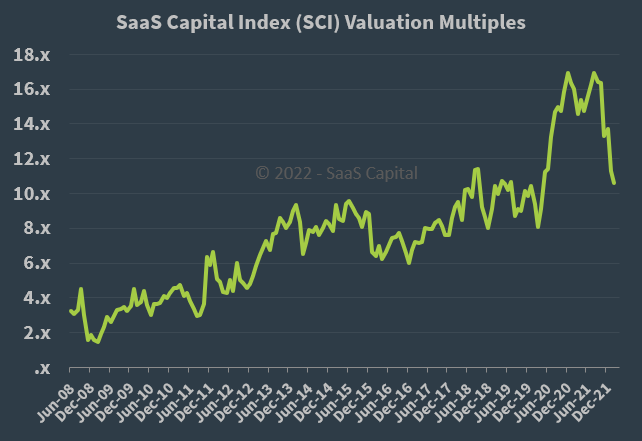 Interestingly, despite losing nearly 40% of their value, operationally, public SaaS companies continue to perform along historical trend lines. The recent decline in public stock prices is not an indication of any current systemic weakness in the SaaS industry or business model. The recent market tumble is a valuation reset driven out of fear of future operational challenges.

In the chart above you can see that growth rates across the deciles for public companies in the SaaS Capital Index remain virtually unchanged between the all-time-high valuation mark of last August and today. Meanwhile, we see that all companies were subject to a revaluation, with the previously highest valued companies subject to the largest percentage declines. Again, this shows us that the stock moves were a reassessment of future risk, despite no changes to current performance.

The chart below displays each company’s growth rate compared to its valuation multiple in August 2021 (green) and again in February 2022 (blue). We see from the r-squared values of the two best-fit lines that growth rate alone predicts about 60% of a company’s valuation! Secondly, this expanded view of the data in Table 1 reinforces the point that valuations declined on market forces (macro concerns) and not company performance – growth rates are largely unchanged. Another observation in this chart is that the variance in valuations dropped considerably in the last six months – the blue dots are more tightly packed together than the green dots.

Valuation declined on macro, not micro concerns: Some of the very high-growth companies slowed a bit between August and February, but DataDog actually increased its growth rate from 67% to 84% (all the while its multiple decreased from 45.5x to 40x). A few companies in the SaaS Capital Index are now shrinking slightly, but you can see in the chart that overall, the majority of companies are still growing in the 15% to 30% range, just as they were in August.

The linear regression estimates for each data set corroborate the fact that the market has revalued growth. First, the X-intercepts for both lines are nearly identical. Both regression formulas predict that in August and February, a company with zero revenue growth would be worth 2.8x ARR. Secondly, the regression estimates show us that in August a 100% growth company might be worth 51x ARR, whereas it would only be worth 35.9x in February (1.00 times the x coefficient). 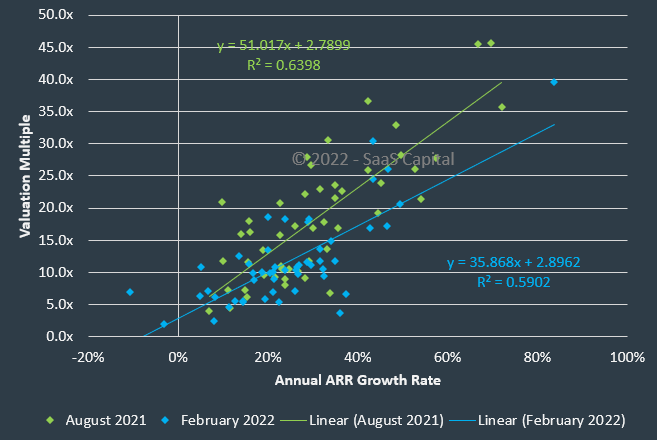 Valuation multiple variance decline: We clearly see in the above and below charts that the wide distribution of multiples in August has narrowed considerably as the broader market tightened. Some of this decline in variance is attributable to a rash of new SaaS IPOs in 2021 with valuations close to the median. But the narrower distribution is predominately due to the most highly valued companies losing the most value. The chart below shows the 25th, 50th, and 90th percentiles of valuation multiples for the SaaS Capital Index over time. Through 2020 and 2021 all SaaS valuations rose, but the highest valuations increased the most. They were also the stocks to see the greatest decline post-peak – Snowflake from 133x to 62x, Zoom from 54x to 11x, Coupa from 43x to 13x, and Fastly from 37x to 10x. The median valuation multiple of the 81 B2B SaaS companies we track now stands at 10.6x, and the distribution of multiples has tightened back around that median to the same degree as it was in 2019 and prior. You can see the raw Index data here. 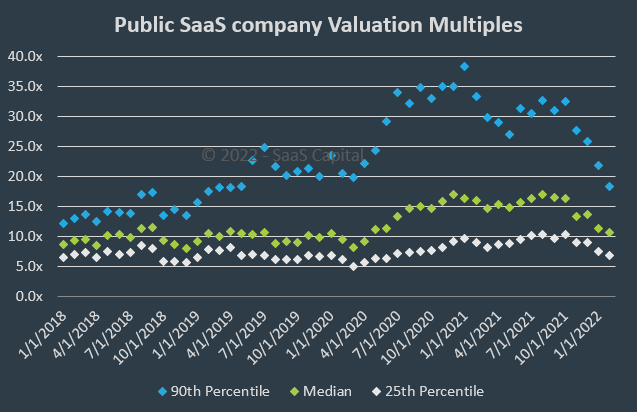 Above is a table showing the five companies in the SaaS Capital Index with the highest valuation multiples as of August 2022 and their valuation multiple at the end of February and the respective growth rates.

Two market dynamics now, in retrospect, signaled a market peak at the end of 2021. Four companies in the SCI were taken private in the six months between September and the end of August. This is tied for the most number of take-privates in any six-month stretch since we started the index in 2018. It is tied for the six months immediately prior, earlier in 2021. Secondly, there were 22 new SaaS IPOs during this six-month stretch – a high watermark, with the second most IPOs again coming in the six months just prior, earlier in 2021. This flurry of M&A and IPO activity indicated a lot of froth in both the public and private markets at the time. There has not been a SaaS IPO so far in 2022, and venture financings, both the number and dollar value, fell in Q1 2022 on a quarter-over-quarter basis for the first time in years.

Regarding risk of a worsening economy, from prior research into how SaaS companies perform in a recession, we know that growth rates will slow, and companies will drive towards profitability, but will otherwise survive an economic downturn fairly unscathed. And interestingly, most companies in the study exited the Great Financial Crisis growing even faster than at the start of the recession. Within several quarters they had mostly made up the lost revenue from the slower growth rate during 2009. We may be seeing a similar dynamic happening now as we exit the COVID-19-caused deep, but short, recession.

In the study from the GFC as well as empirical evidence from our own portfolio during the pandemic, vertical solutions directly impacted by the macro environment (financial services, housing and automotive during the GFC, and travel and hospitality during the pandemic) were much more seriously impacted and in the case of the GFC, took much longer to recover. The COVID-crash was significant, but short, and recovery for all industries has been faster than in the years following the GFC.

Private valuations tracked the public markets to some extent through the last several years: valuations crept up a bit and variance increased significantly, with some incredibly high outlier equity rounds. We heard of 100x ARR valuations more than a few times – but on the whole, private valuations did not rise to the same degree as public valuations.  Pre-pandemic, we estimated the public-to-private valuation discount to be about 28%. This means that if a median B2B public SaaS company was valued at 10x current runrate ARR, then a median private company would be valued at 7.2x ARR. When we say median company here, we mean median metrics like growth rate, retention rate, burn rate, and gross margins compared with its ARR-sized peer group. As we’ve shared over the years, we think the best methodology for valuing your company is to start with the median public multiple, then apply the discount to get to a median private multiple, then apply discounts and premiums based on how your company’s metrics compare against your peers.

We think the public-to-private valuation discount dislocated over the last two years from its fairly stable pre-pandemic 28%. We estimate that the discount widened [data here] to ~50% over the last two years, with a much higher standard deviation in the private markets than both historical trends and even the public market at the time. The chart below shows the SaaS Capital Index compared to our private valuation estimate. 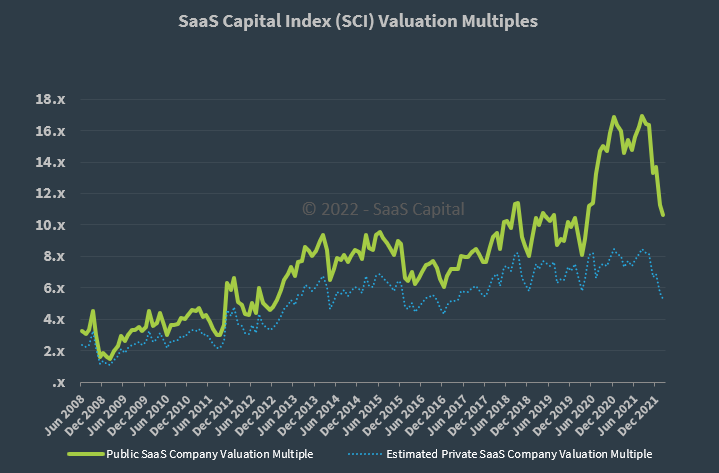 On median, we’ve seen the market consistently value private B2B SaaS companies around 5x to 8x ARR over many years, including the last two. Outliers to the high side and low side have certainly existed throughout time, and there were many more (mostly to the high side) over the last two years, but the bulk of valuation events have remained in this range. Growth remains the biggest driver of valuations, and double-digit multiples are more attainable than ever with very high growth, but in 2022, there is more valuation risk to the downside than there is upside exuberance.

SaaS Capital 2021 Recap and Look Ahead

No one knew what to expect going into 2021. Sure enough, the year delivered an unpredictable potpourri of economic extremes and indicators. A summary of our year-end recap and look ahead is below.