Long-time readers of our work may recall we have strived to shed a light on the opaque, confusing, and volatile practice of valuing private SaaS companies. As we near the mid-point of 2019, we thought it would be good to check on current private company valuation multiples.

SaaS Capital is in a unique position to understand SaaS company valuations as we have witnessed 29 of our companies raise equity or exit in the last 5 years. The exits have been a combination of strategic sales and private equity recaps and have provided us an effective way to benchmark private SaaS valuation multiples against public data.

The SaaS companies in our valuation analysis ranged from $4 million to $45 million in revenue and covered a wide variety of industries. With a few ‘unicorn’ exceptions, these were scale-up stage companies with a median growth rate of 26%, and retention and burn rates in a narrow range around the average for companies their size.

Not surprisingly, the two primary variables that drove the exit valuations of those companies more than any others were:

There are dozens of other factors impacting valuation (all of which we will cover in an upcoming white paper), but these two set the baseline.

Public company comparables are the classic starting point for valuation analyses because the data is easy to get and is updated in real time.

As with all valuation approaches, the goal is to determine the risk-adjusted value of a company’s future cash flows. For traditional companies, stock analysts start with a company’s earnings and apply a multiple based on expected growth and risk. This is the Price/Earnings or P/E multiple. For SaaS businesses, however, earnings are generally understated for two reasons: customer acquisition costs are expensed up front, and most SaaS companies are still in an aggressive growth stage.  For this reason, current earnings are not as good an indicator of future cash flows as current revenues, and that is why SaaS company valuations are more highly correlated to their size than their profitability.  As a result, SaaS businesses trade on a price to revenue basis, or “Revenue Multiple.” 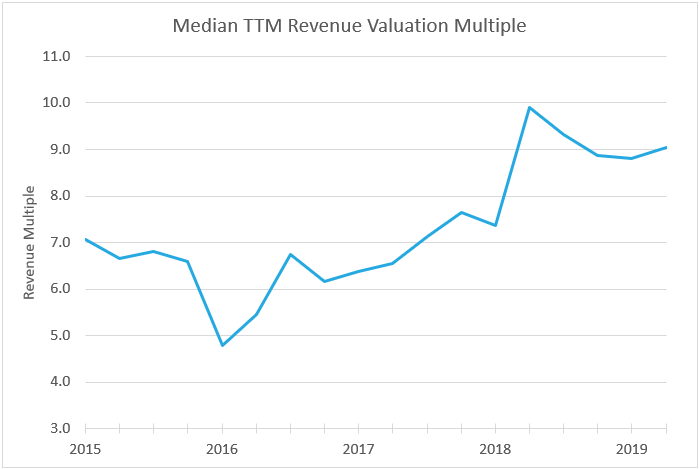 The data is from the same set of 21 companies over the 5 years and is therefore not impacted by new entrants or exits. The average value of a public SaaS company over this period has been as low as 4.8 times revenue to as high as 9.9 times.

This provides data for the first step in determining your valuation: understanding the value of public SaaS companies at the time you sell equity. The two (primary) remaining inputs are:

Let’s deal with the second one first.

The Impact of Revenue Growth on the Valuation Multiple

It will not be news to you that the biggest driver of what multiple of revenue will be applied to your business is how fast it’s growing.  This relates back to estimating the potential future cash flows of the company. A higher growth business will likely generate more cash in the future relative to its size today than a slow growth company of the same size.  The chart below demonstrates the strong relationship between growth and revenue valuation multiples. 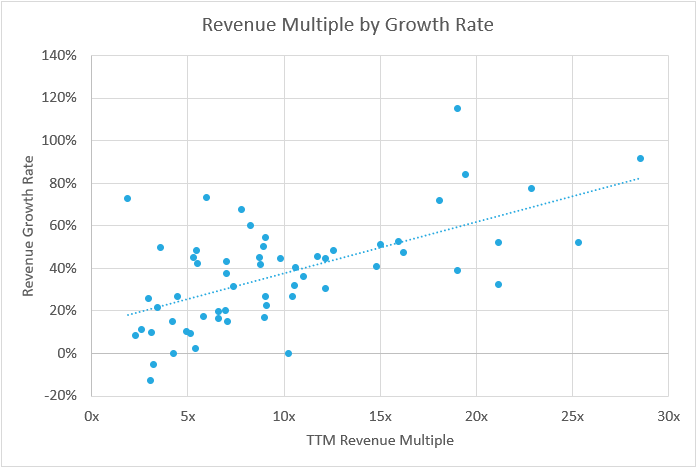 So, using the chart above, identify your company’s growth rate in the vertical axis and then scan over to the dashed line.   That is what your company’s revenue multiple would be if it were public (and all other valuation drivers being equal).

So, the final missing data point is obviously the discount your business will trade to its public counterparts.

The Missing Link: The Private to Public Discount Multiple

There is a real discount from public to private valuations, and it’s there for some very good reasons. The fact that you can freely and easily trade these stocks drives up their demand vs. private businesses.  Also, these are larger businesses that are statistically less likely to fail, so investors will pay a premium for that safety.

We can derive the average public-to-private market discount by overlaying the data from our portfolio of private SaaS companies from 2014 to 2019 against public valuations over that same period.

The blue dots in the chart below are the TTM revenue valuation multiples for public companies with varying growth rates. This is similar to the previous chart but averaged over the last 5 years. The green dots are the revenue multiples for private SaaS companies with similar growth rates over the same period. The green and blue lines are best-fit regressions for the respective series of data. 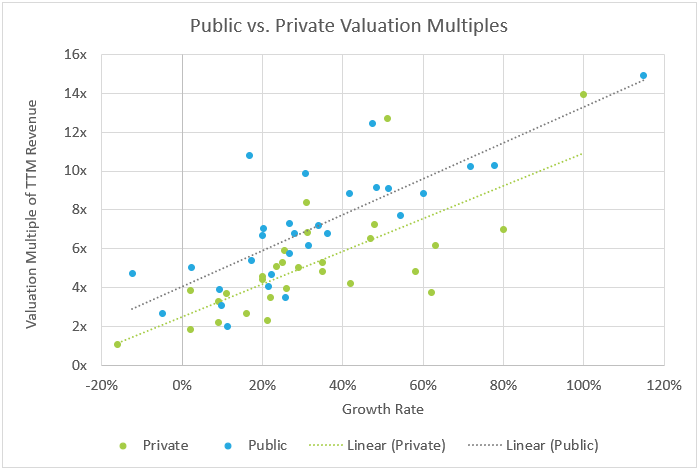 The distance between the lines is about 2x TTM revenue, and that remains fairly consistent across the range of growth rates and multiples. So, the valuation discount for being a private SaaS company vs. a public one is about 2 times revenue.

How Much is My SaaS Business Worth?

That’s the missing number: 2. To determine what your private SaaS company is worth:

Is that overly simplistic? Of course. What about Total Addressable Market (TAM), retention, gross margins, and “synergies,” you ask? All are important, and all those inputs help explain why all the dots in the chart are not on the straight lines. The world is full of variability and nuance. However, if you step back and look, the formula will certainly give you “most of the answer” and provide a good place to start an informed valuation discussion.

We believe the public to private discount is relatively stable over time, although we have seen it widen if there is a relatively quick run-up in the public markets, and we have also seen it shrink in situations where large SaaS businesses that could be public choose to remain private. There is little private discount for these firms.

We hope this data set and framework will help guide your thinking on the value of your SaaS business.

Update October 16, 2019: An expanded white paper on how to value a SaaS company has been released, which tackles the impact of market size, gross margins, retention, and several other factors. The white paper includes new data and a detailed framework designed to work with the current private company multiples found in the SaaS Capital Index, which is updated monthly. The white paper is available for direct download below. 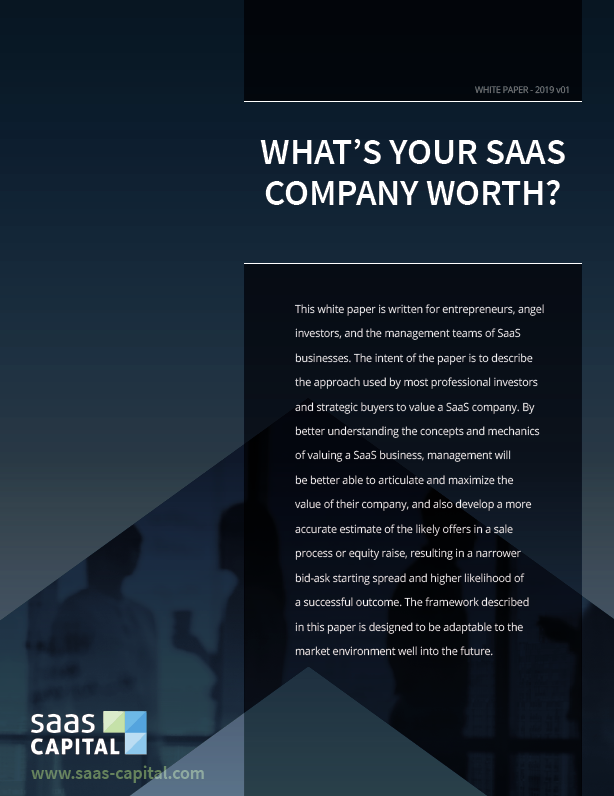 SaaS Benchmarks from Our 2018 Survey

Each year SaaS Capital conducts the largest survey of its kind to gauge the overall performance of private B2B SaaS companies. Here are the results from the survey we conducted in 2018 which covered more than 900 SaaS companies.