Over the last year or two, many of SaaS Capital’s portfolio companies have initiated channel sales strategies, and many more are contemplating it. Given the trend, this was the focus topic at a recent portfolio company CEO roundtable.

The stories and anecdotes from the room of about 10 portfolio company leaders shared a common theme: more of the horizontal companies had investigated a channel partnership and/or had found more success with it than the vertically focused companies. Strategies included both complementary vendors and geographically focused resellers (ex-USA).
One concept that stuck with us from the conversation was around how to best identify if a particular channel will be successful or not. For the highest likelihood of success, there must be the right combination between the market, the reseller and you.

Mike Volpe, co-founder and former CMO of HubSpot, was part of our roundtable and shared that a good way to identify a possible mutually beneficial relationship is when you’ve received several inbound inquiries from the same type of potential partner asking about “ways to work together.” HubSpot originally started by selling to digital marketing agencies, but after several of them asked for ways to resell HubSpot to their clients, they realized there was a large channel there. 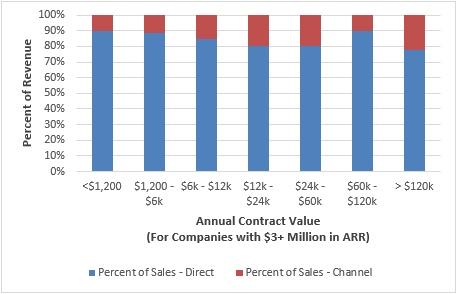 Our portfolio companies’ experiences echo the data from a larger sample of SaaS companies. In a section of this year’s annual survey of 950 private B2B SaaS companies, we asked several questions on channel partnerships and found that 50% of companies see some sales via a channel; the other half sell 100% directly.

There is no obvious trend in the prevalence of channel sales across company size, but as seen in the chart to the right, there was a slight trend across annual contract value (ACV). For companies with $3 million in ARR and above1 and for those for whom at least some sales come in through a partnership, the median percent of revenue sold through the channel is 10% for low ACV products and around 23% for medium and higher ACV products.

The companies that responded to the survey were split about evenly between those that describe themselves as selling into a vertical market and those that have a horizontal offering, and there is quite a difference between the prevalence and depth of channel sales between them. Sixty percent of horizontal companies run a channel program while only 40% of vertical companies do. 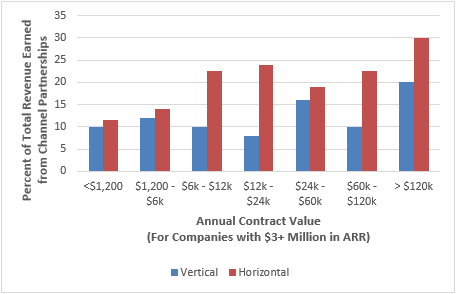 The second chart shows that the percent of sales generated from those channel programs are much higher across ACVs for horizontal companies than for their vertical counterparts.
For companies selling into a specific industry (like dental practices for instance), most of the marketing and sales efforts can be efficiently focused in-house. For a horizontal solution (like a human resources platform), a strategy of co-selling with complementary partners focused into specific verticals or other tangential products can help break up the vast market.

The key takeaway from the survey data and portfolio company experiences is that partner programs are more common and make up a larger percentage of total revenue among companies with a horizontal product than for companies selling a vertically oriented solution. Other observations:

1Note: When analyzing survey data across multiple series, we frequently focus on larger, more established companies, as their metrics tend to be more stable and we avoid the “dividing by a small number” problem.