In our 9th annual survey* of private B2B SaaS companies, we asked participants questions to explore the overall topic of capital efficiency. This is the first of a four-part series examining the data and focuses on when private SaaS companies raise equity. 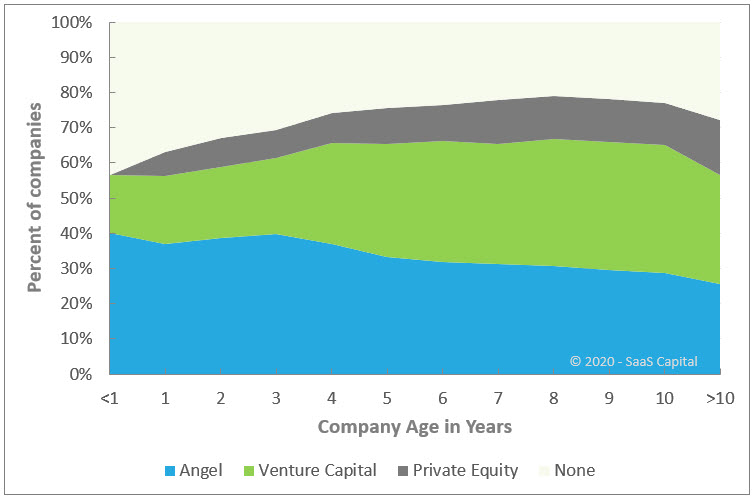 In terms of timing, the chart above shows that 40% of companies are bootstrapped at founding, and another 40% start with angel backing. Venture funding really begins to proliferate about the time that SaaS companies turn four years old. The percent of companies backed by VCs grows from 21% in year 3 to 32% in year 5.

From the survey data we have found that the average time to get to $1 million in ARR is about 4 to 6 years. Combining these data points, it appears that the run rate revenue threshold to attract institutional equity investors is about $1 million in ARR.

Our hypothesis is that it is at this point – years 8, 9, or 10 – when early-stage equity investors begin seeking an exit for their portfolio companies in order to return liquidity to their limited partners. There are simply fewer companies of this age now, and more of the remaining companies are still bootstrapped.

The last comment on the chart above is that, despite what has seemed like a gold rush of private equity interest into the SaaS industry over the last several years, only 12% of companies in the survey report primarily being funded from that source. 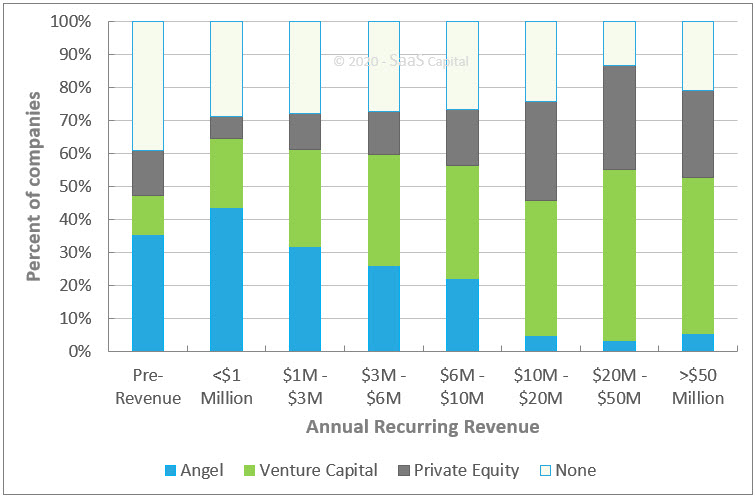 The chart above examines the same data by revenue level, instead of by company age. The hypothesis that VCs get more heavily involved post-$1 million in ARR is supported in this chart, as we see the percent of companies funded by VC expand significantly at the $1 million ARR mark.

Up to $10 million in ARR, approximately 25% of companies are bootstrapped. Above $10 million ARR is where private equity becomes a significant source of funding. This is consistent with SaaS Capital’s anecdotal experience.