How much money do private SaaS companies raise?

The median angel funding invested in pre-revenue companies and companies with less than $1 million in ARR is $660,000. The median amount of venture capital funding for that same group is $3 million, although it should be reiterated that VCs get much more heavily involved post-$1 million ARR.

For companies with revenue greater than $1 million ARR, the average (which we specifically use here instead of median to illustrate the effect of outliers to the high end) of total equity raised, regardless of source, is surprisingly no more than about 2.5 times a company’s annual recurring run rate revenue. The average amounts raised, by source and ARR, are presented in the chart below. 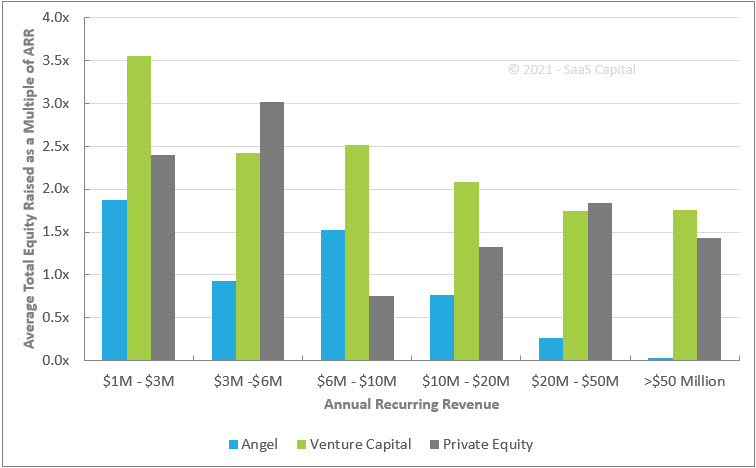 A reminder that in the chart above, the columns show total funding from all sources, but are separated by primary source of funding. For example, to benchmark a business that has $5 million ARR and has raised two angel rounds for $500,000 each and a $5 million Series A from a venture capital firm, you would compare solely against the green column in the $3-6 million ARR grouping. You would not add the blue (Angel) and green (VCs) bars in the chart together; the green bar already shows total funding amount from all sources. In our example, at a total funding of 1.2x ARR ($6 million raised / $5 million ARR), the majority of which came from VCs, your company is far below the average amount of 2.45x ARR for peer companies.

The overwhelming majority of angel funding is less than 1 times ARR. Venture funding only tops 2.5 times ARR in the very early stage, when ARR is relatively small.

We were surprised to see that even private equity funding, which is typically structured as partial or full recapitalizations or buyouts, averages between 1.0 and 2.0 times ARR for more established companies. This is perhaps due to two possibilities:

Whatever the explanation, for those that raise outside equity, the average SaaS company raises between 1.0x and 2.5x ARR, with that amount decreasing as a company scales. The chart below shows the quartile distribution of amounts of capital raised by ARR. 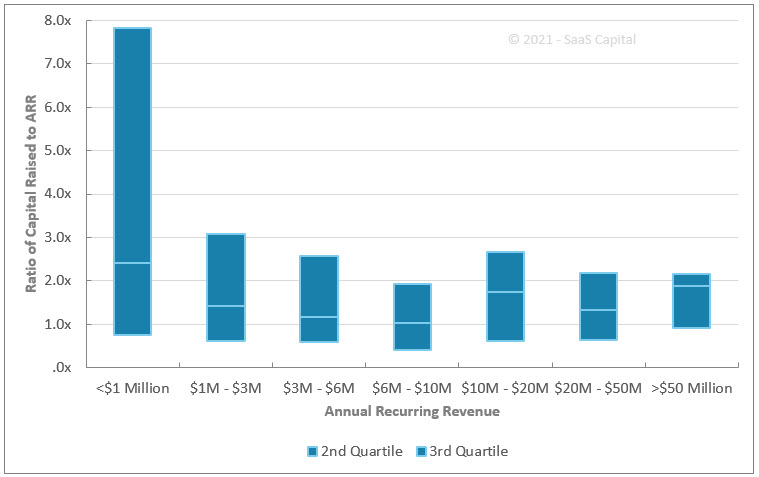 The two blue sections combined in each column show the 2nd and 3rd quartiles, the middle 50%, of amounts of capital raised as a multiple of revenue. The light blue line is the median amount for each ARR grouping. The top quartile is very high (~30 times ARR) and not very useful for benchmarking without other supporting data, so it is not shown. The lowest quartile essentially goes to 0.0x, as some companies only raised nominal amounts. The key takeaway here is that, for companies with more than $1 million of ARR, 75% have raised less than 3 times ARR, and more than half have raised less than 2 times ARR.

Coincidentally, while working on this research piece, we spoke with a private equity investor who specifically mentioned that one of his firm’s required criteria is “invested capital to-date of less than one times ARR.”

A question that comes up in conversation somewhat frequently is whether a company’s customer acquisition cost (CAC) drives the amount of capital it raises. The thinking goes that the higher a CAC, the more capital a company must raise to fund the sales and marketing costs to support revenue growth. We found that there is no correlation between CAC and the amount of equity raised.

In our 9th annual survey of private B2B SaaS companies, we asked participants questions to explore the overall topic of capital efficiency. This is the first of a four-part series examining the data and focuses on when private SaaS companies raise equity.

In our 9th annual survey* of private B2B SaaS companies, we asked participants questions to explore the overall topic of capital efficiency. This is the fourth of a four-part series examining the data and focuses on capital efficiency.