In our 9th annual survey* of private B2B SaaS companies, we asked participants questions to explore the overall topic of capital efficiency. This is the fourth of a four-part series examining the data and focuses on capital efficiency.

Can We Weight a Company’s Performance by Its Capital Efficiency?

We wanted to investigate if there is a direct correlation between the amount of capital raised and company performance. The value proposition of raising outside capital is that it will help you grow faster than you otherwise could have, increase the value of your business in a shorter period of time, and ultimately, increase your wealth faster and/or more than otherwise possible. The cost is the dilution to a founding team’s ownership percentage from selling equity to an investor. The goal is that the value creation made with the extra cash outweighs the value lost through dilution.

Said another way, the venture capital sales pitch is that you will own a smaller piece of a much larger pie.

Without knowing far more detail around valuation, liquidation preferences, and participation rights, we can’t complete a company-by-company analysis, but below we propose a methodology for adjusting a company’s performance metrics by the amount of equity it has raised in order to compare it to its bootstrapped peers, or itself on a bootstrapped-adjusted basis.

The “Rule of 40” is a benchmark proposed by a private equity investor who stated he would only invest in companies for which growth rate plus profitability margin was greater than 40. This rule of thumb is a great shorthand way to determine a company’s performance against its peer group.

While growth plus profitability (GPP) of at least 40 is one investor’s benchmark for an investable company, the actual peer benchmarks are generally lower, which makes sense since an investor is presumably looking for better-than-average companies. The chart below shows the median GPP of bootstrapped companies from the survey, categorized by ARR ranges. 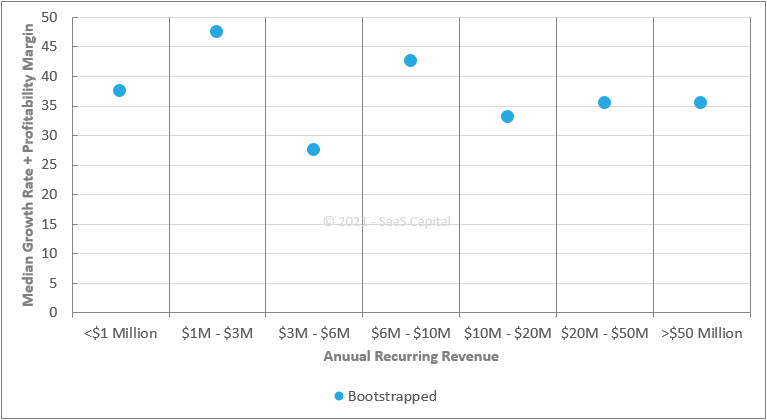 Before we even get to the adjustment, we were surprised to see that the median GPP of VC-backed companies is lower than its bootstrapped peers. The chart below compares the two groups. 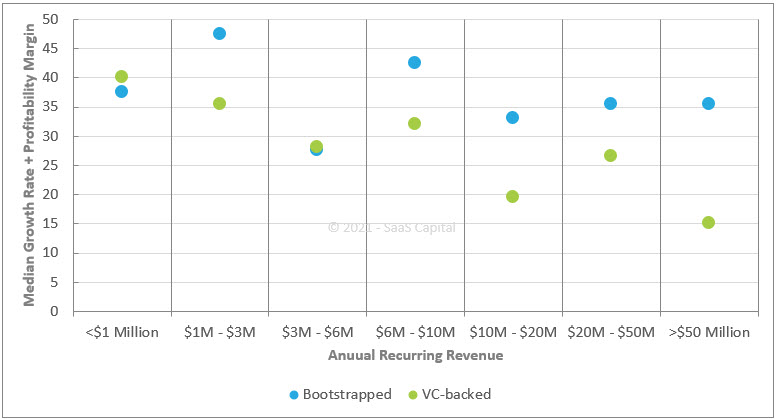 To adjust the GPP of venture-backed companies to an “as-bootstrapped” basis, we weight (divide) the GPP by the multiples of ARR that the company has raised. There is no adjustment for companies who have raised less than 1 times ARR, and we netted out current cash on-hand, to account for companies that may have just raised an equity round and have not yet deployed the capital into growth initiatives.

Since we use the multiple of ARR raised, the resulting downward adjustments deltas – the difference between the green dots and gray dots in the chart below for each revenue category.  This is to say, somewhat obviously, the more capital the company has raised relative to its ARR, the more the GPP is adjusted. Early-stage companies raise more as a multiple of ARR than later-stage companies, so they are adjusted more. 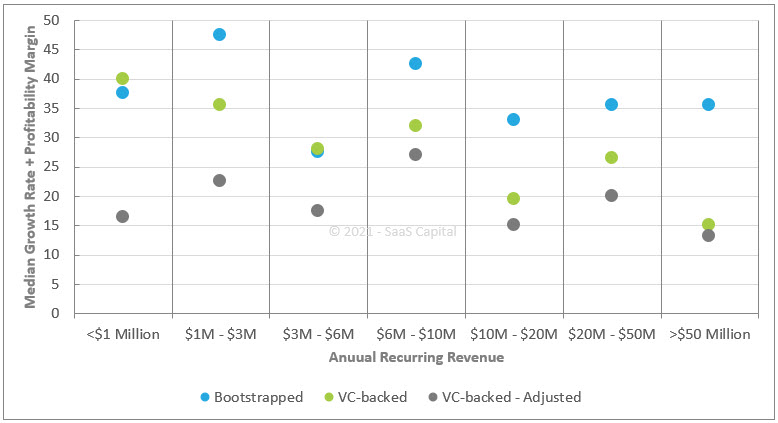 The end result is fascinating: On an as-bootstrapped adjusted basis, the adjusted GPP of VC-backed companies is fairly consistent through the company life cycle, but instead of around 35%, VC-backed companies have adjusted-GPP levels of between 15 and 20%, about half of their unfunded peers.

This shows that the added spending from outside investment does not result in a growth rate increase to even reach parity with unfunded companies on a GPP basis, let alone surpass them. And when adjusting the GPP for how much capital was raised and spent, this contrast is even more significant.

One important caveat to this analysis is that it focuses solely on the GPP score, which puts equal weight on growth and profitability. PE investors may weight those two metrics equally, but VC investors typically weight growth over profitability, particularly early in a company’s life. But as stated above, the GPP is a good shorthand metric for company health, so it is a good starting place.

In our 9th annual survey of private B2B SaaS companies, we asked participants questions to explore the overall topic of capital efficiency. This is the first of a four-part series examining the data and focuses on when private SaaS companies raise equity.