Public SaaS company data is the best starting point when valuing a private SaaS business so we created the SaaS Capital Index (SCI) to be an up-to-date valuation tool for pure-play, B2B, SaaS businesses. The SCI excludes companies with very low annual contract values (ACV) as these companies have characteristics more similar to B2C companies than B2B, and is based on annualized current run-rate revenue (ARR), not trailing or projected revenue like other indices use. For background on the SCI, please see our Q1 update and our valuation framework for private SaaS companies. 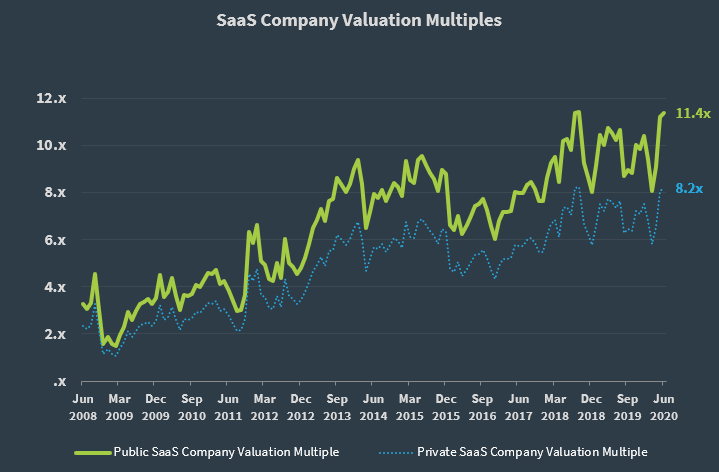 Valuations in the public markets are at all-time highs. The SCI is now tied for the highest value in our dataset’s history, which was hit in the fall of 2018.

After showing a drop of 12% at the end of the first quarter, the SCI rebounded sharply to now show a year-to-date gain of 37%. 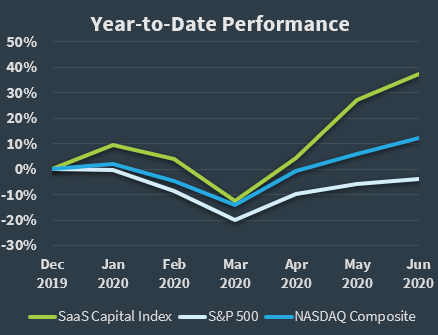 At the end of the first quarter, the SCI showed a drop of 12% which was marginally better than the loss shown by the NASDAQ Composite. The stocks in the SCI have rallied sharply from their March lows, pushing the SCI to a year-to-date gain of 37%. This compares to a 12% gain for the NASDAQ Composite and a 4% loss for the S&P 500.

SaaS Companies with the Highest Multiples

The table below shows the 5 companies from the SCI with the highest ARR multiples.

*Quarterly revenue spread across each month, expressed in millions

Zoom Video Communications (ZM), a provider of video-first communication platform and web conferencing services, tops the list with a multiple of 53.4x ARR. Revenue growth is up nearly 100% this year while the stock is up more than 270% since the end of last year, forcing its multiple to nearly double so far this year.

DataDog (DDOG), which provides a monitoring and analytics platform for developers, information technology (IT) operations teams and business users, follows closely behind with a multiple of nearly 48x ARR. The company’s multiple has soared more than 70% so far this year as the stock has more than doubled and revenue has increased 37%.

Fastly (FLSY), a real-time content delivery network (CDN), rounds out the bottom of the top 5 but earns the distinction of having the largest year-to-date stock price gain, which in turn has sent the company’s multiple rocketing up more than 230%.

SaaS Companies with the Lowest Multiples

The table below shows the 5 companies from the SCI with the lowest ARR multiples.

*Quarterly revenue spread across each month, expressed in millions

As noted above, the majority of stocks in the SCI are showing a year-to-date gain but none of the 5 with the lowest multiples are positive. LogMeIn (LOGM) is nearly flat but that is due to its looming acquisition by Francisco Partners and Evergreen Coast Capital.

FireEye, Inc. (FEYE) provides intelligence-based cybersecurity solutions that allow organizations to prepare for, prevent, respond to and remediate cyber-attacks. The company commands the lowest multiple in the SCI at just 3x ARR. Year-to-date revenue has been flat as the stock has slumped.

Upland Software Inc. (UPLD) is a provider of cloud-based enterprise work management software applications for the information technology, process excellence, finance, professional services and marketing functions within organizations. Revenue is up 23.5% this year but shares are flat.

Talend SA (TLND) is a provider of open source integration solutions for data-oriented companies and integration platforms under Apache Spark. Year-to-date, an 8.8% gain in revenue combined with an 11% stock decline leaves the company with a 20% drop in its multiple.

Earlier this month, Rob Belcher provided an update to the SaaS Capital community (you can join the community here) that included the following observations:

We created the SaaS Capital Index (SCI) as a resource for the owners and operators of software-as-a-service (SaaS) businesses to use as part of a valuation framework for private SaaS companies. With the recent market swings at the end of Q1, it is an opportune time to check in on the SCI.

New Retention Data and the Impact on Valuation

Because of its compounding effect on growth, revenue retention is now well established as the most important metric for ensuring medium- to long-term business health. Earlier this month, we published our 2020 B2B SaaS Retention Benchmarks, which explored retention benchmarks across of range of breakdowns, including annual contract value (ACV), growth, channel sales, venture-backed companies compared to bootstrapped companies, and other breakdowns.

When is a Good Time to Sell a SaaS Company?

A feature of a sustainable recurring revenue business model is that, unlike other business models, you can pretty much know your company’s valuation at any time, and depending on how confident you are in your forecasts, project it out into the future as well.