With the third quarter of 2020 now closed, below are our observations of the SaaS industry and an update to the SaaS Capital Index, which tracks public company valuation multiples. Our Q3 SaaS sector observations include: 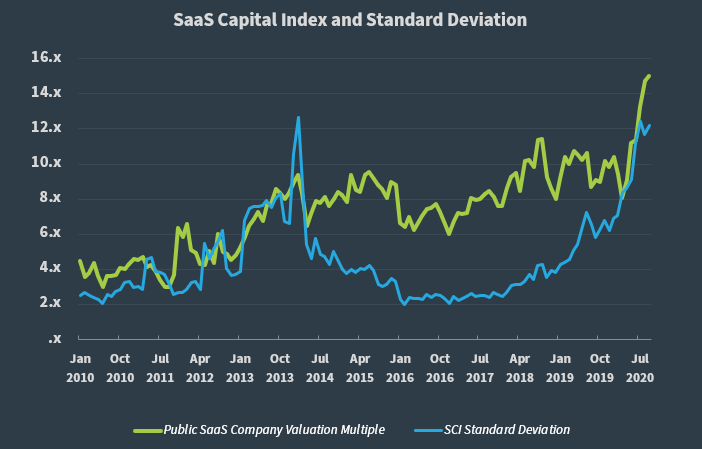 Background: Public SaaS company data is the best starting point when valuing a private SaaS business, so we created the SaaS Capital Index (SCI) to be an up-to-date valuation tool for pure-play, B2B, SaaS businesses. The SCI excludes companies with very low annual contract values (ACV) as these companies have characteristics more similar to B2C companies than B2B. The index is based on annualized current run-rate revenue (ARR), not trailing or projected revenue like other indices use. For background on the SCI, please see our Q1 update and our valuation framework for private SaaS companies. 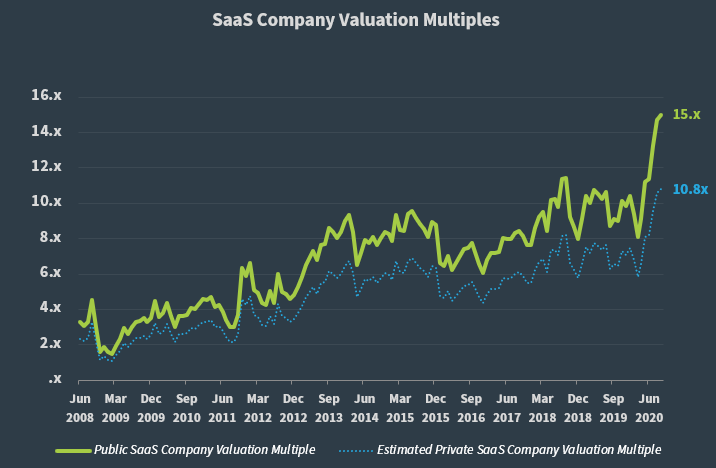 In our Q2 2020 update, we saw that the public market valuations were sitting near all-time highs. The SCI has now surged into uncharted territory as it jumped 32% from where it sat at the end of the second quarter.

After a drop in March, the SCI rebounded to show a strong gain by the end of June. Now, despite a volatile September, the 9/30 closing prices have the SCI still sitting 10 percentage points higher than where it stood at the end of the second quarter, and showing a 47% year-to-date gain. 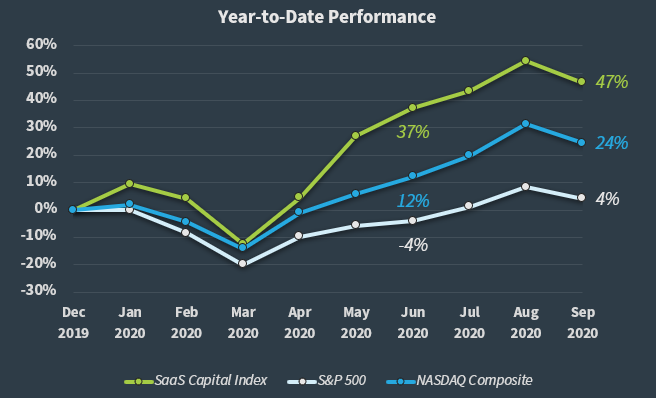 As shown in the first chart in this post, the median SaaS valuation multiple for public companies in the SCI stands at 15.0x ARR. The table below lists the companies from the SCI with the 10 highest ARR multiples.

Earlier this year, we saw that Zoom Video Communications (ZM) and DataDog (DDOG) led the pack for priciest companies, and that remains the case. DataDog is now taking the top slot with a price at just over 55 times ARR.  Recent IPOs and additions to the SCI, Bigcommerce Holdings, nCino, and Duck Creek Technologies Inc. (DCT) also make the top ten.

The table below shows the companies from the SCI with the lowest ARR multiples.

While most of the stocks in the SCI have rallied this year, a few have struggled. All of the companies featured in our Q2 update for the lowest ARR multiples remain on the list here. Cornerstone OnDemand retains the distinction of showing both the largest stock drop and the largest multiple decline for the year.

Public SaaS company data is the best starting point when valuing a private SaaS business so we created the SaaS Capital Index (SCI) to be an up-to-date valuation tool for pure-play, B2B, SaaS businesses. As of June 30, the median SaaS valuation multiple for public companies stands at 11.4x ARR. Applying the historical private company discount of 28%, the median valuation multiple for private SaaS companies is currently 8.2x ARR.

Long-time readers of our work may recall we have strived to shed a light on the opaque, confusing and, volatile practice of valuing private SaaS companies. As we near the mid-point of 2019, we thought it would be good to check on current private company valuation multiples.

We created the SaaS Capital Index (SCI) as a resource for the owners and operators of software-as-a-service (SaaS) businesses to use as part of a valuation framework for private SaaS companies. With the recent market swings at the end of Q1, it is an opportune time to check in on the SCI.