In this post, we share our SaaS industry observations at the start of Q1 2021, and update the SaaS Capital Index, which tracks public company valuation multiples.  As we have noted in the past, public SaaS company data is the best starting point when valuing a private SaaS business, so we created the SaaS Capital Index (SCI) to be an up-to-date valuation tool for private, pure-play, B2B, SaaS companies to use to help determine their own value. The SCI excludes companies with very low annual contract values (ACV) as these companies have characteristics more similar to B2C companies than B2B. The index is based on annualized current run-rate revenue (ARR), not trailing or projected revenue like other indices use. For more background on the SCI, please see our Q1 update and our valuation framework for private SaaS companies.

In our Q3 2020 update, we saw that public market valuations for SaaS companies had surged into uncharted territory, and the momentum continued into Q4. We begin 2021 with multiples 69% higher than where they stood at the beginning of 2020. 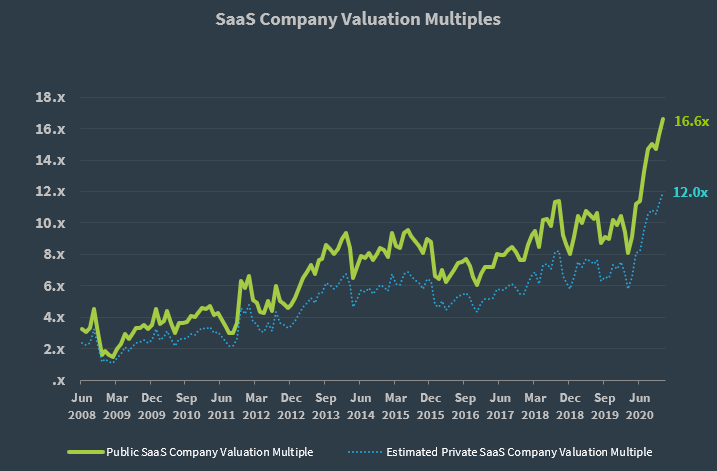 The story of stock price inequality – some companies are valued very highly, while others not — continues, but with some important caveats. In the chart below, you can see inequality manifest in the blue line, which is the standard deviation of the 61 public companies currently in the index. It dropped a little last month, but at 17.6x, it remains at the highest point ever. 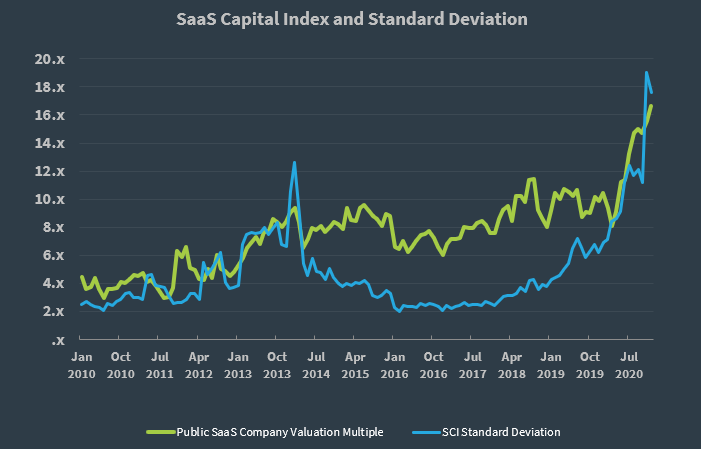 The large standard deviation is driven more by really high valuations on the high end than very low ones on the low end. True, not all companies are benefitting from the run-up in valuations, but the lowest valuation multiple out of all public SaaS companies is 3.4x run rate ARR. Ten years ago, that was the median valuation multiple! So, even the “losers” in this market are doing fine; they are lagging their peers, but it just shows that SaaS is a very bright spot in the broader economy (see the indices comparison chart below).

The high variance is driven in a significant way by just one company, Snowflake. Its valuation multiple is 123x ARR. The next highest multiple in the index is Unity Software at 52.5x ARR, and there are numerous companies in the high 30s and 40s. Removing Snowflake from the index lowers the standard deviation to 11.5, about where it had risen to over the last year before Snowflake went public and joined the SCI.

The SCI quickly dropped to a 12.5% loss on the year by March. The rebound was swift and dramatic, with the SCI showing a 37.2% gain by the end of the second quarter. A mild rally in Q3 was followed by a surge in the fourth quarter, leaving the SCI up 78.2%, compared to the end of 2019. Overall, the SCI followed the same general trends as the broad market indices but outperformed at each stage. 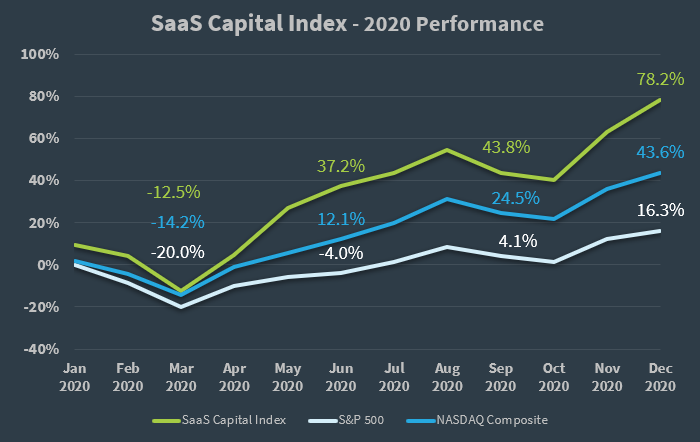 Of the stocks in SCI with a full year of trading data, only 4 didn’t show a gain on the year, and only 1 (Cornerstone OnDemand, down 25%) showed a decline of more than 3%. The median year-over-year return was 61%.

The table below lists the companies from the SCI with the 10 highest ARR multiples.

Continuing a trend we noted at the end of Q3, stocks that have recently gone public are showing extremely high multiples. Snowflake, which debuted in September, boasts the highest multiple in the SCI and marks the only stock to sport a triple-digit multiple. Second on the list is Unity Software, which also began trading in September. Zoom Video, with the 9th highest multiple in the SCI, holds the largest year-over-year stock gain – despite dropping 28% in Q4.

The table below lists the companies from the SCI with the 10 lowest ARR multiples.

FireEye remains among the stocks with the lowest multiples in the SCI, despite a rally in Q4 amid the SolarWinds hack. FireEye posted both the largest Q4 stock gain and largest Q4 multiple change.

With the third quarter of 2020 now closed, below are our observations of the SaaS industry and an update to the SaaS Capital Index, which tracks public company valuation multiples.

Long-time readers of our work may recall we have strived to shed a light on the opaque, confusing and, volatile practice of valuing private SaaS companies. As we near the mid-point of 2019, we thought it would be good to check on current private company valuation multiples.

SaaS Capital has had nine of its companies “price” their equity in the last 24 months through either a sale of the business or a substantial equity raise. Here's a look at the valuations.